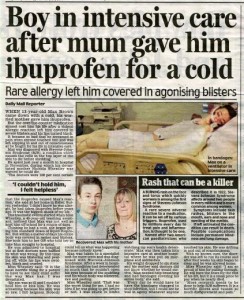 As soon as we heard about Nicky Wheatley and her son’s terrifying ordeal, we knew it was something newspapers would be keen on. And TODAY, her story appears in the Daily Mail after we secured her an interview deal.

Max, 13, from Esher, spent four weeks in hospital with his skin blistering and peeling off his face after taking ibuprofen for a cold. He was diagnosed with Steven Johnson’s Syndrome –which cases cells in the skin to blister and peel in painful rashes, before he slipped into unconsciousness and was put on a ventilator. The disorder affects just two people in every million, but can be fatal if left untreated.

The traumatic series of events started when Nicky, 45, a teaching assistant, noticed that her son wasn’t well so kept him off school for a couple of days. Thinking he had a cold, she began giving him ibuprofen – but soon his lips were beginning to turn black and crack. She took him to her local GP thinking it might be tonsillitis, but her GP told her to take Max straight to hospital, but doctors were also baffled. By this time his skin was blistering and peeling off, while his lips were swollen, black and crusty. He was then taken to a specialist unit in Essex where he underwent further testing, and he was diagnosed with Steven Jonson’s Syndrome.

The rare illness starts with a burning rash on the face and torso which quickly worsens. Various triggers have been identified by medics, and the drug ibuprofen, used everyday to treat pain and inflammation, is one of those thought to occasionally spark the reaction. Max was rushed into intensive care, where he was put on morphine and his weight dropped to just six stone, while his distraught mum stood by his bedside every day and night. Doctors didn’t know whether Max was going to survive, and at one point Nicky said it was touch and go. The syndrome, which has NO cure was left to run its course. Thankfully, after four weeks Max started getting better and was allowed to return home. He has since recovered.

Nicky says: ‘I was devastated. My son was so ill and I couldn’t hold him or kiss him. I had no idea if he was going to pull through or not, at one point it was very touch and go. His skin was peeling off, he looked like something from a scary film. He will have the scars for the rest of his life, but it is a small price to pay when he nearly died.’ Nicky wanted to sell her story about her Steven Johnsons Syndrome ordeal to raise awareness of the little-known condition.

If you’ve got a story you’d like to share in public in order to raise awareness – and get paid for your time – email us on message@talktothepress.com or fill out our sell my story form to the right.

Talk to the Press
← Previous Story Sell a story to Reveal magazine – my GP thought I was a grumpy teen, in fact I had cancer
Next Story → Share your story with ITV