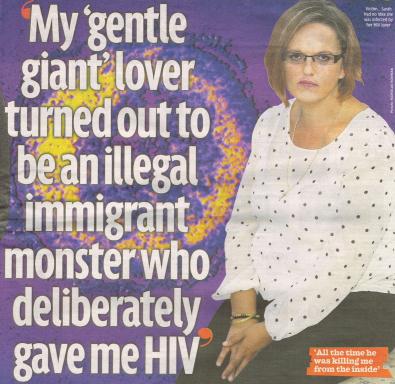 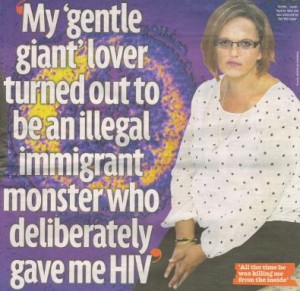 When Sarah Watson met Henry Assumang through mutual friends she thought he was an honest, hard-working, honourable man who would protect her from harm’s way. But the reality couldn’t be any further from the truth.

For 18 months, Assumang, an illegal immigrant from Ghana, slept with the 38-year-old British mother-of-two without protection, despite knowing he was HIV positive. Not once throughout their relationship did he insist on wearing protection, yet he was taking daily medication to prevent the virus developing into full blown AIDS and going for regular blood counts at Southampton Hospital.

In 2011, Assumang was arrested and charged with infecting two women with the deadly virus. Despite the DNA being a 100 per cent match, he pleaded not guilty to GBH at his plea hearing. To the victims’ disgust, over the course of 20 months the case has been adjourned six times due to his poor health and his ruthless sacking of his defence barristers.

Last month, Sarah believed she’d get her day in court to make Assumang realise the depravity of his actions. But Winchester Crown Court suspended the case due to his ill health – the following day he died. It’s believed he stopped taking his medication in the weeks leading up to his death.

Brave Sarah waived her right to anonymity in a bid to help other HIV victims speak out and we secured her an exclusive deal for her story with the Sunday Mirror newspaper.

She says she feels let down by the justice system who allowed Assumang to die an innocent man – because they let him adjourn the case so many times.

She’s now campaigning for tougher charges to be brought against people who do not disclose their HIV status.

She believes the UK need to follow in America’s footsteps where the criminal transmission of HIV is a class B felony in some states and in the same category as manslaughter, kidnapping, drug crimes and robbery.

Sarah says her life has been turned upside down since being diagnosed with the deadly infection and her children’s lives have been deeply affected too.

Sarah says: ‘They bent over backwards to accommodate him. But what about me? He’s left me with a death sentence but managed to avoid a prison sentence for his actions. To me, dying was an easy way out and evaded the justice system. I have no easy way out, I have to live with the stigma of being HIV positive for the rest of my life.

‘The CPS were soft on him and now he’s died an innocent man and I never got to tell him how his recklessness has ruined my life.’

If you want to talk about a crime, or an injustice, contact us on message@talktothepress.com or fill out the sell my story form to the right.