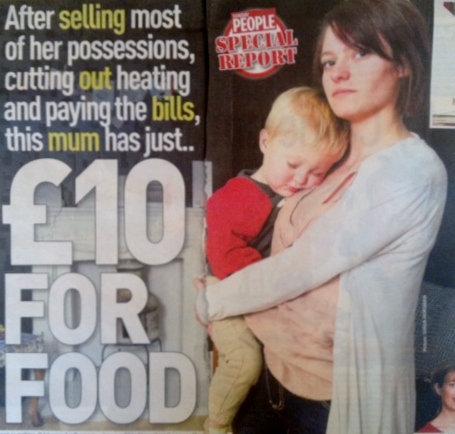 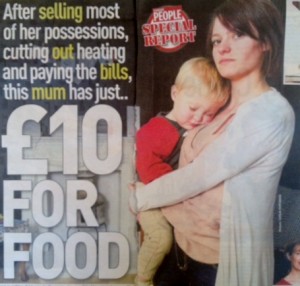 As soon as we heard about the shocking situation faced by young mum Jackie Monroe, we knew a newspaper would be interested in talking to her.

This time a year ago, Jackie had a steady job and earned £27k a year. Now, she survives on £10 a week for food once she’s paid her bills. Last year, Jackie left her job believing it would be easy to secure a new one, but as austerity has hit Britain, she’s found it impossible to find work.

Jackie and her two year old son will be among thousands of people who will be queuing for food handouts this Christmas.

This weekend, Jackie shared her story with the Sunday People newspaper as part of their campaign against below inflation caps on benefits and cuts in housing benefits. In April, Jackie is set to lose the £80 per month she currently recieves towards her rented property.

Jackie says: ‘I’m cold and hungry, and I don’t have any money to waste at all. I’m living on the minimum as it is. MPs really need to think twice before slashing benefits to people like me.’

If you have a story you’d like to share, or you’d like to speak out against government cuts, email us on message@talktothepress.com or fill out the sell my story form to the right.