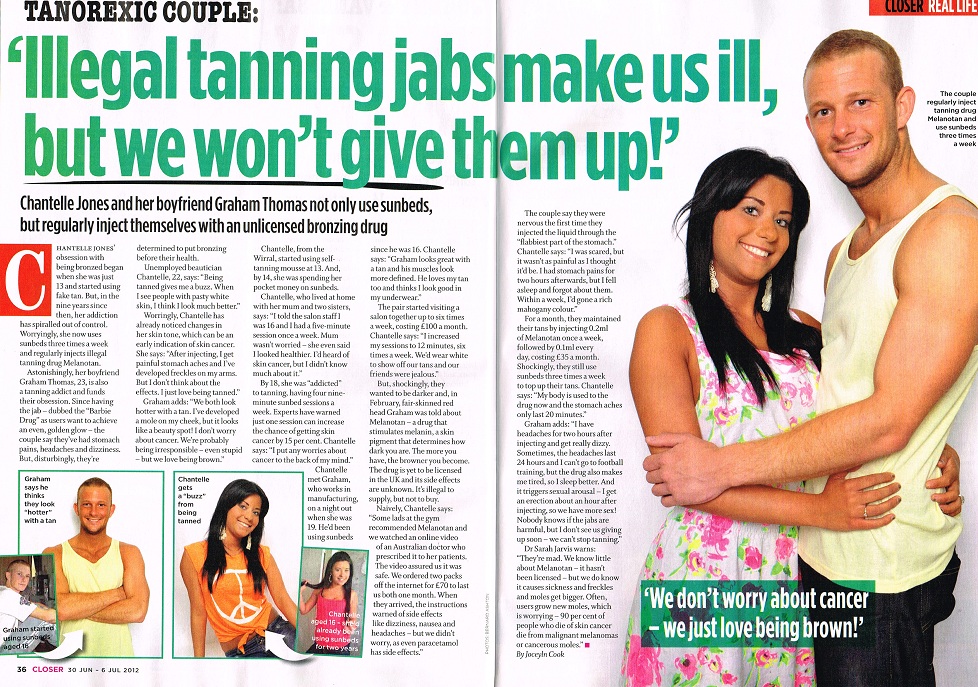 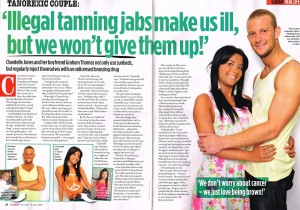 Like many people, Chantelle Jones and Graham Thomas feel they look healthier with a tan. But the young couple have taken their tanning habit to the extreme. This week the self-confessed ‘tanorexics’ appear in Closer magazine, where they admit they have become addicted to sunbeds and illegal tanning injections.

Chantelle’s obsession with being brown started when she was 13 and she started using fake tan mousse. But it has since developed into a full-blown addiction. She now uses sunbeds three times a week and regularly injects herself with Melanotan – dubbed the ‘Barbie drug’ – to boost her tan even further.

And Chantelle’s boyfriend Graham has followed suit. He funds the couple’s habit, spending up to £100 a month on salon appointments and buying packs of Melanotan on the internet, which they both inject themselves with. The drug is illegal to supply but not to buy and the couple spend £70 a month on packs.

However Chantelle and Graham have both suffered nasty side effects, including headaches, dizziness and nausea, and shockingly the symptoms can last up to 24 hours. By using sunbeds so often the couple are also increasingly the likelihood they will get skin cancer.

But incredibly, even this hasn’t put them off. ‘Being tanned gives me a buzz,’ says Chantelle. ‘When I see people with pasty white skin I think I look much better. Graham looks great with a tan too and his muscles look more defined. We don’t think about the effects – we just love being tanned.’