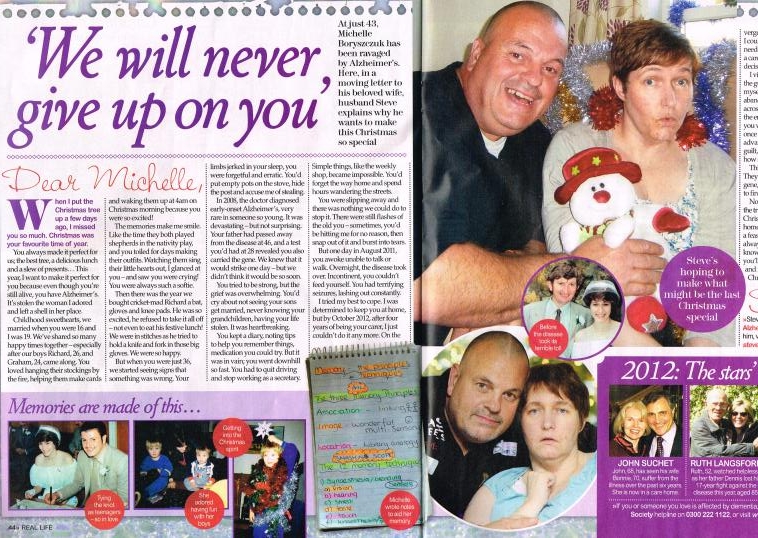 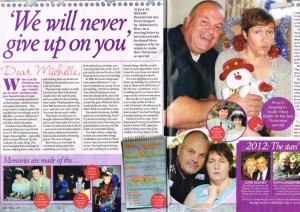 This week, Steve Boryszczuk’s moving letter to his young wife who was ravaged by Alzheimer’s appears in Best Magazine. In the letter, he talks about the devastating effect the illness has had on him and their two children and why he can’t wait to bring Michelle home for Christmas.

When Steve’s beloved wife, and mother to their two children, was diagnosed with Alzheimer’s disease at 39 he knew their life would change forever. Her formal diagnosis came a year after she first started showing signs of the disease at just 38.

Michelle, now 43, is believed to be one of the youngest sufferers of the disease in the UK. Today, Steve, a lorry driver, speaks out about the devastation the disease has caused on his family and how he’s still trying to forgive himself for making the difficult decision to put Michelle in a care home.

The couple, who have been married for 27 years, used to love holidaying together and lead an active life – but now Michelle is bedbound and incontinent – and unable to do simple things for herself.

Although Michelle’s father died from Alzheimer’s aged 46, growing up, Michelle never imagined she’d be struck down by the neurological disease so young. But at 28, tests revealed Michelle was carrying the same gene as her father and developing Alzheimer’s young seemed inevitable. Although the news was damming, Michelle had two sons to raise so tried her best not to let her fears take over her life. But in 2008, when Michelle turned 38, she started showing signs of the disease.

Steve says simple tasks became too much for her like driving and picking up shopping. She’d forget to look at crossroads and wait at traffic lights. She quickly became a danger to herself and others. She would also disappear for hours on end – mainly because she’d forgotten her way home. Although Steve quit his job as a lorry driver to be Michelle’s full-time carer, after four years he couldn’t cope. Steve made the agonising decision to put Michelle in a care home in November 2011. To this day, he spends 12 hours a day at her bedside and prays she knows who he is.

Steve is now fundraising for the Alzheimer’s Society and will be taking part in the Great Wall of China Trek in October, walking alongside his brother Stanley. the pair hope to raise in excess of £10,000.

‘People think Alzheimer’s only affects the elderly, so I am sharing Michelle’s story to help raise awareness for young sufferers too,’ says Steve, 47, who lives in Louth, Lincolnshire. ‘I miss my wife every day.’

Talk to the Press
← Previous Story I’ve beaten cancer four times – and I’m only 30!
Next Story → Coverage in newspapers, magazines and on television for one of the smallest premature babies to survive – EVER