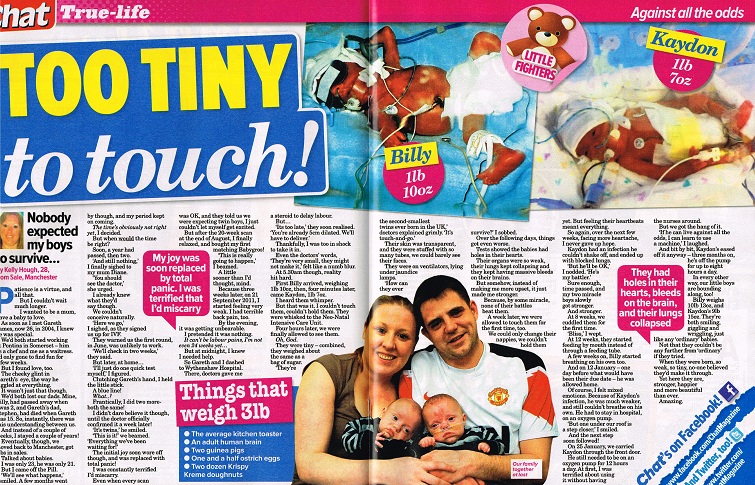 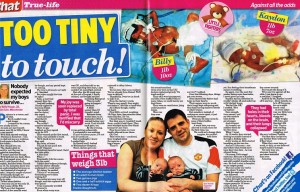 Kelly Hough got in touch with us with her amazing story of how she gave birth to tiny twins who weighed less than a bag of sugar, and this week her inspirational tale appears in Chat magazine.

Kelly, 28, and her partner Gareth, 26, conceived through IVF treatment and Kelly’s pregnancy was fine until 23 weeks when she suddenly started suffering stomach cramps last September. It turned out she was experiencing an early labour and the babies were delivered that day 17 weeks prematurely.

Billy and Kaydon weighed less than 2lbs each at birth and doctors didn’t expect them to survive. They spent several weeks in intensive care and suffered from jaundice and bleeds on the brain because of their early birth.But incredibly they defied everyone’s expectations and miraculously pulled through. They were allowed home four months later in January this year and Kelly says they get stronger by the day. It’s still too early to tell if they will have health problems, but Kelly says it’s thanks to the amazing doctors they are even here today.

She says: ‘When they were born no one believed they’d make it through. Yet here they are, stronger, happier and more beautiful than ever.’

If you’ve got a story you’d like to see printed in Chat magazine, contact us on message@talktothepress.com or fill out the sell my story form to the right.

Talk to the Press
← Previous Story TTTP secures coverage in numerous newspapers for couple with disastrous wedding photos
Next Story → I forgot the man I loved – this week’s Love it! magazine