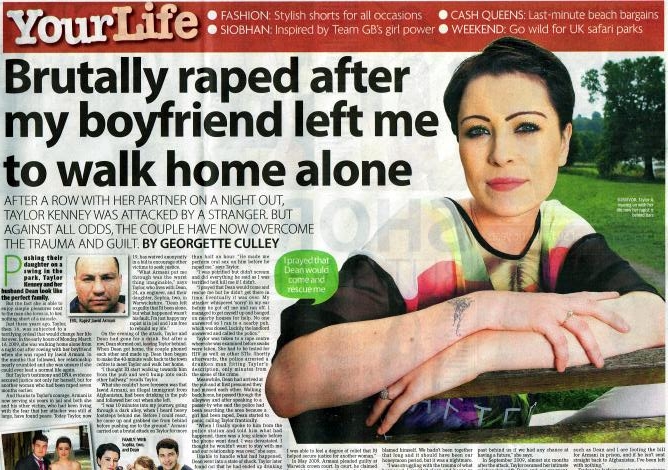 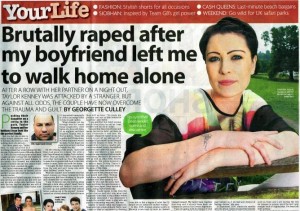 Brave rape victim Taylor Kenney, 19, appears in the Mirror today talking about how she rebuilt her life and, her relationship with her husband, after she was brutally raped by an illegal immigrant, Jawid Armani, three years ago.

Thanks to Taylor’s courage to see him jailed, he was also convicted for a separate rape on a 48-year-old woman seven months earlier.

In the early hours of Friday 14th March 2009, Taylor’s boyfriend, Dean stormed off after a drunken row – leaving Taylor in their local pub in Kenilworth, Warwickshire. The couple phoned each other on their mobiles and reconciled and Dean began to walk back to the pub to meet Taylor. Because Taylor, then 16, knew the area well and had walked the 40 minute journey dozens of times, she thought she’d start walking and meet Dean on his way. But 10 minutes into her journey, as she walked through an alleyway, she realised she was not alone.

Jawid Armani, an illegal immigrant from Afghanistan, had spotted her in the pub and was following her. Before Taylor had time to react and run away, he’d subjected her to a savage attack. Afterwards, Taylor banged on nearby houses for help. No one answered the door so she fled to a nearby pub and woke up the landlord.

They answered and called the police and she was taken to a rape centre where she was examined and had swabs taken. Meanwhile, the police arrested a man fitting her description around the corner from the scene of the attack. His name was Jawid Armani, an illegal immigrant. He was arrested and charged with two counts of rape.

Armani, 32, pleaded guilty through an interpreter at Warwick Crown Court at the end of March 2009. Thanks to Taylor’s swift actions, his DNA was linked to another rape on a 48-year-old woman from West Reading seven months before his horrific attack on Taylor. He was sentenced to a minimum of six years and one month in jail.

The couple’s relationship came under terrible strain, but they stuck together and are now married with a 2 year old daughter. Taylor says: ‘It was the most terrifying thing I’ve ever experienced and it nearly broke me. But I am determined to remain strong for the sake of my daughter. Dean and Sophia mean the world to be and, with their help, I am beginning to move on from my terrifying ordeal.’

If you’ve been a victim of rape or crime and would like to share your experiences, please email message@talktothepress.com