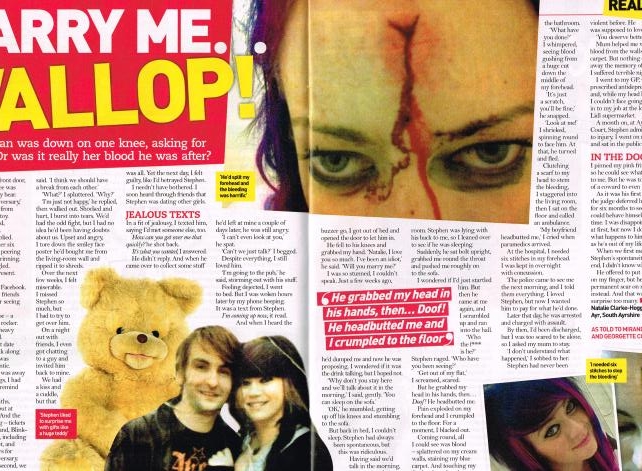 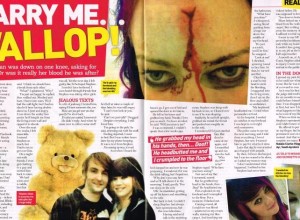 When Natalie Clarke-Hogg’s long-term boyfriend said he wanted a break from their two-and-a-half year relationship she was heartbroken. But less than two weeks later he proposed leaving her elated – only to headbutt her hours later. The impact was so strong her skull cracked and doctors told her she was lucky to survive, and this week, she shares her story with Love it! magazine.

Natalie met Stephen McGinn, 23, an oil rig worker in March 2010 through mutual friends on Facebook. She says it was love at first sight and she was ‘mesmerised’ by his eyes. He made her laugh and she was blown away by his charming nature. But out of the blue, Stephen asked to have a break from their relationship.

Natalie was devastated but just two weeks later, whilst drunk, Stephen told Natalie she was the love of his life and asked her to marry him. She told him to go to bed as he was too drunk. Once in bed, he started demanding who Natalie was sleeping with – threatening to ‘kill him’. Natalie got scared and told him to sleep on the couch. He did as he was told but turned on Natalie once downstairs. He grabbed Natalie by the throat and screamed at her to tell him who she was seeing, before headbutting her. As blood rushed down Natalie’s face he picked her up and threw her against the front door.

Natalie initially blacked out before she came round and was drenched in blood. She went to the bathroom and noticed a huge dent, and crack, in her forehead. Stephen told her it was a scratch but Natalie ignored him and called 999. Stephen fled the house. Natalie was rushed to hospital where she received six stitches and had to have her forehead glued back together.

The doctor told her if he’d headbutted her any harder she would have died. Stephen was arrested later by police later that night. He originally pleaded not guilty but changed his plea to guilty at the last minute. His sentence was deferred for six months good behaviour until May 9th, 2013, at Ayr Sherriff Court in October 2012.

‘I don’t think the sentence was long enough,’ says Natalie, 22, a sales assistant from Ayr, Scotland. ‘I’m going to be scarred for life – mentally and physically. I can’t believe that somebody who claimed to love me could hurt me in this way. One minute he was asking me to marry him – the next he was beating me. My life will never be the same again.’

We’re currently in the process of securing Natalie a deal with a national paper. If you’ve been a victim of domestic violence and would like to share your story – email message@talktothepress.com