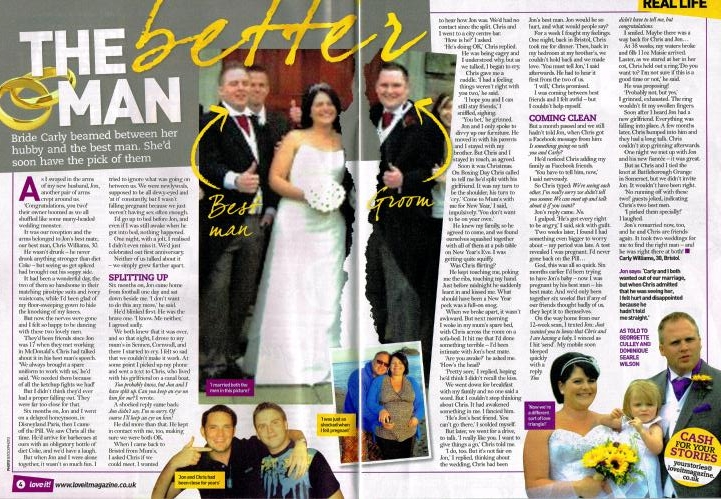 I married the best man! This week’s Love it! magazine 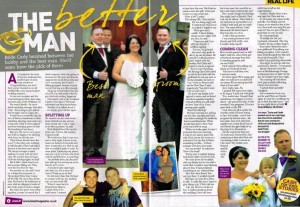 As soon as we heard Carly William’s story, we knew a women’s magazine would been keen to feature it. And this week, she appears in Love It! magazine sharing her story.

When Carly Williams ex-husband, John, ended their marriage she sought comfort in his best man at the wedding, Chris. Now, Carly and Chris are happily married and have a gorgeous baby girl.

Carly and John, both 30, had an on-off relationship for four years before tying the knot in March, 2008 in Bristol Registry Office. The couple were delighted to announce to family and friends that they were finally getting married. But as they started planning their ‘budget wedding’ their relationship changed and the stress of planning for their big day became too much for them.

Carly hoped that once the stress of the wedding was over they’d be able to rekindle their relationship – but, once married, things just turned from bad to worse. In November 2009, John told Carly he was leaving her. She moved in with her brother and texted Chris telling him to keep an eye on John as she was worried about him.

John hadn’t told Chris that his marriage was over and Chris was shocked to hear the news from Carly. They arranged to meet up as Carly needed a shoulder to cry on and Chris became a fantastic support to her when she was emotionally low. At the time, Chris’ long-term relationship was coming to an end and the pair found they had a lot in common to talk about. On Boxing Day, three months after Carly’s marriage ended, Chris told Carly his relationship was over and Carly invited him to spend New Year’s Eve with her.

Chris and Carly started to see one another and in January 2010, Carly found out she was two weeks pregnant with Chris’ baby. Although the situation wasn’t ideal the couple were happy and decided to keep it. In early March, John’s sister found out through the grapevine about Carly and Chris’ relationship, and wasn’t happy. But around this time John got together with one of his life-long friends, Sarah, which helped ease the tension for everyone.

In September 2010, Chris proposed to Carly in hospital after she’d just given birth to Maisie, now 19 months. Carly was delighted and said ‘yes’. This time, she knew it was right and didn’t have the same doubts she’d experienced with John.

In August 2011, John married Sarah, and Chris and Carly have since married too. And best of all, John and Chris are now rediscovering their old friendship.

‘I’m the happiest I’ve ever been,’ says Carly, who works for Direct Line and lives with John and Maisie in Bristol. ‘People might think we had some sort of sordid affair but we didn’t. I felt guilty and confused at the start because I knew how close John and Chris were. But I couldn’t lie to myself and live in denial. I loved Chris and wanted to be with him. I’m glad it’s all worked out for the best.’

If you’ve got a relationship story you’d like to sell, email us on message@talktothepress.com or fill out the sell my story form to the right.