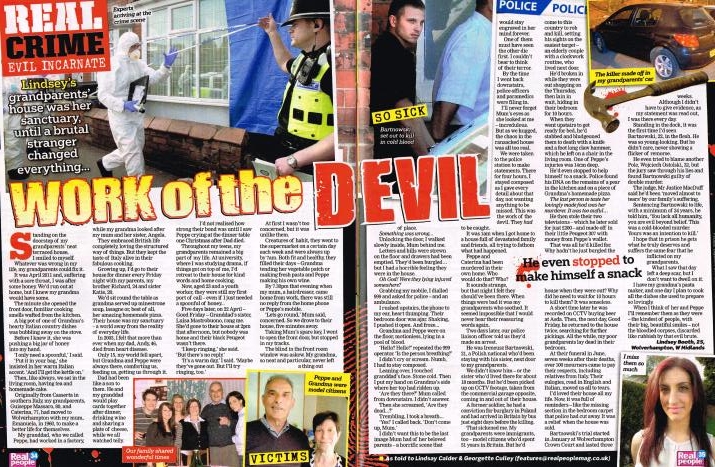 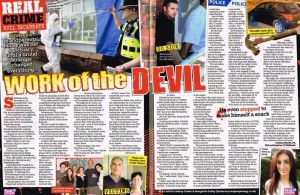 Lindsey Booth, 24, is the courageous granddaughter who made news headlines after found her grandparents Guiseppe and Caterina Massaro bludgeoned to death in a horrific double murder last April. Their murderer had been allowed to enter the UK, despite having a criminal record in his homeland of Poland, and as a result, Lynsey is keen to see immigration laws toughened up.

In a sinister and calculated attack, Polish immigrant, Ireneusz Bartnowski, 22, had been observing the couple’s daily routine and had hid in a cupboard in their bedroom for more than 10 hours before bludgeoning the pair to death with a claw hammer. He even stole their car and old television which he sold for just £200.

In July 2012, Bartnowski was found guilty and sentenced to life in prison. The judge was almost moved to tears after hearing the family victim impact statements, in which Lindsay and her siblings spoke of their huge loss. Sentencing, he said: ‘You have shown no remorse, no pity. Your only concern has been saving yourself and heaping the blame on others. You are evil beyond belief.’

Lindsey says she and her family have always been close with their grandparents. But last April 2011, Lyndsey, 24, who found her beloved grandparents lying in pools of blood in their bedroom.

The court heard how the elderly couple had defense injuries from where they’d tried to shield themselves from Bartnowski’s knife and claw hammer. Lindsey is haunted by the thought that her grandparents would have helplessly watched each other being attacked.

‘It’s a disgrace that Bartnowski was allowed to waltz into the UK despite being a criminal,’ says Lindsey. ‘He was convicted of burglary four years ago in Poland and shouldn’t have been allowed in the country. I have nightmares and wake up in hot sweats – he destroyed our family and our loss is unimaginable.’

Lynsey would now like to see immigration laws changed.

If you’re like to publicise a cause, email us on message@talktothepress.com or fill out the sell my story form to the right.