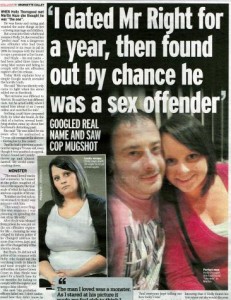 When Holly Thorogood met Martin Hoyle, 28, she thought he was the love of her life. But six months into their relationship and she noticed things weren’t quite adding up. Hoyle, who was unemployed and drank heavily, had given her a different surname ‘Haze’. This only came to light when his sister added her on Facebook under a different name.

Confused, Holly tapped his name into Google and was horrified when several stories came up about him being jailed for six years over the attempted rape of a 74-year-old. Disgusted, she contacted police – alerting them to the fact he was using a fake name and hadn’t alerted her to his sordid past.

Hoyle, who will be on the sex offenders’ register for life after forcing a pensioner to flee her home naked after he broke in and ambushed her in the shower, had been jailed three times for failing to comply with the register.

In March this year, he was jailed for the four time for six months at Exeter Crown Court for failing to comply with the register again.

Today, Holly is campaigning for tighter regulations on sex offenders after Hoyle’s probation officers failed four times to closely monitor him and we helped her share her thoughts with the Sunday Mirror.

Holly says: ‘Although it’s Hoyle’s responsibility to inform new partners of his past and notify the police of any changes, it’s also his probation officers duty to make sure he’s telling them the truth.

‘I can’t believe he’s got away with it so many times before eventually getting caught. I feel sick that I never knew I was sleeping with someone who’s considered a dangerous sex offender, what if I had children?’

‘It’s terrifying. I feel really let down by the system. Why wasn’t he being monitored carefully? He practically lived with me, if he was being monitored closely that would have came to light.

‘Why didn’t anybody alert me to his past? I feel violated and disgusted at myself from going out with a dangerous sex offender. Four times is completely unacceptable to let someone so dangerous slip through the net.’

Holly got in touch wanting to know who she could talk to, and we helped her sell her story to the Sunday Mirror.

Sell story to the Sunday Mirror? If you’d like to sell your story, email us on message@talktothepress.com or fill out the sell story form to the right.

Talk to the Press
← Previous Story Publicity for a book? – Talk to the Press helps Rosemary Locock promote her book about her inspirational daughter
Next Story → Sell story to Bella magazine: we secure Natasha Pilter deal for her story about securing justice after being abused by her family GP