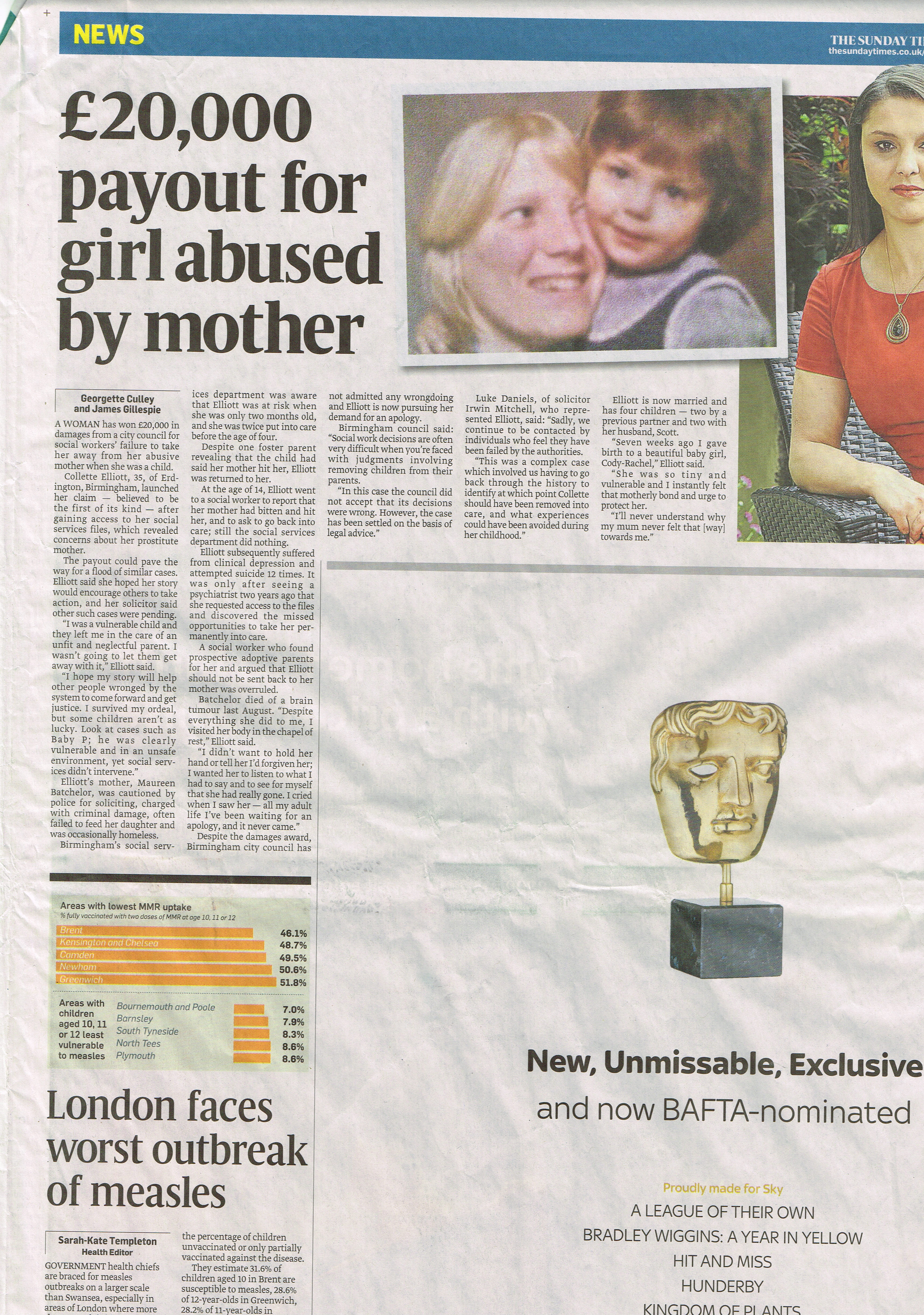 TTTP client shares her story with the Sunday Times 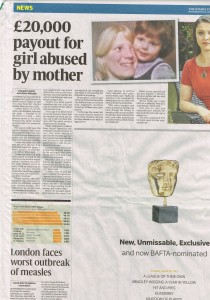 TWO years ago, mum-of-four Collette Elliott took legal action against Birmingham City Council for failing to take her into full-time care when she was a child. Despite being known to social services as ‘at risk’ from just two months old, Collette was left in her mother’s care.

But instead of protecting her vulnerable daughter, Maureen Batchelor, an alleged prostitute, flitted between volatile relationships, abandoning her daughter in dark hallways while she entertained men.

Collette was given mashed potato and pasteurised milk for nourishment. Neglected and unloved, Collette suffered physical and mental abuse at the hands of her mother up until she left home aged 18. In what is though to to be a UK first, Birmingham City Council has agreed to pay Collette a five-figure sum settlement for damages for her pain and suffering, loss of earnings and ongoing psychotherapy.

But Collette, now 35, says this all means nothing without an apology for what she was forced to endure.

Collette says: “All I’ve ever wanted is for them to admit that they were wrong. It was never about the money – it felt like social services had failed me and I needed to stand up to them. I wanted to shout, ‘Look, I’m one of the children that you let down. I may be an adult, but I’m still hurting – see how it has affected me.

“I don’t remember a time when my mum showed any love towards me – I constantly felt lonely. My mum never bought me a birthday or Christmas present and she used to get me out of bed for fun, just so she could beat me.”

It took two years for the council to settle out of court for a five-figure sum, during which she lost her mother to a brain tumour in August 2012.

Collette says: “While the settlement from the council is a step forward, nothing will make up for what I was forced to endure. It’s my own children that I need to thank for saving me and I’m determined to give them the childhood that I didn’t have – filled with happy memories. I’ve done enough looking back. Now it’s time for me to concentrate on my family’s future.”

If you’ve got a story you’d like to share with the Sunday Times, email us on message@talktothepress.com or fill out the sell my story form on the right.

Talk to the Press
← Previous Story TTTP sees Christian Plowman’s true life story published as a book – available in all good bookshops now!
Next Story → Exclusive interview with the Sun for the inspiring mum who had 19 miscarriages over 15 years before finally becoming a mum