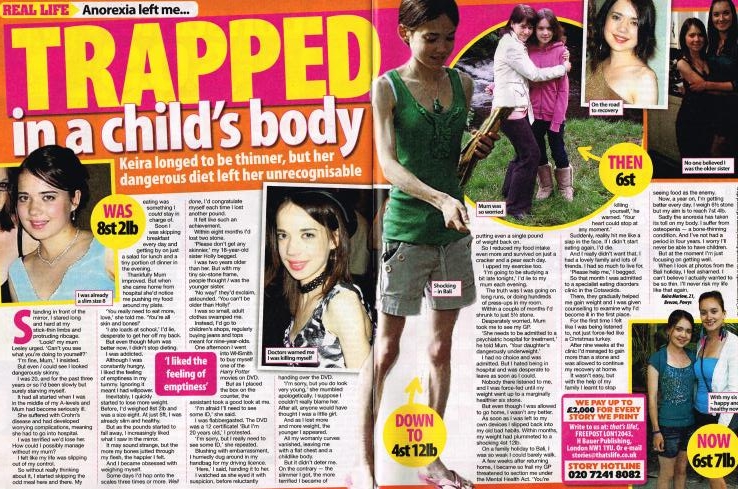 Anorexia left me trapped in a child’s body 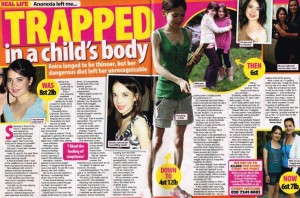 Keira, 21, from Wales, is recovering from anorexia which last year almost killed her after her weight dropped to a dangerously low 4 stone 12lbs, the average weight of a nine year old. As soon as we heard her story, we knew a magazine would be interested and this week, it appears in That’s Life.

Keira hasn’t had periods for four years and is worried her fertility may be affected, and she also suffers from osteopenia, which can lead to osteoporosis. She says she’s often mistaken for a teenager and no one can believe that her sister, who is 18, is in fact two years younger than her.

Keira was diagnosed with the condition when she was 17 and studying for her A-levels. She believes it was brought on by stress of her mum falling ill and she felt her weight was the only thing in her life she could control. Before she fell into the grip of an eating disorder Keira weighed 8 stone 2lbs, a healthy weight for her 5’0” frame, but she started rapidly losing weight in 2009.In just eight months she lost two stone and her family were deeply worried when her weight dropped to just 6 stone 2lbs by the end of the year.

When Keira’s weight dropped to just five and a half stone in April 2010 she was admitted to a psychiatric hospital, but she says they did nothing to address the problem, simply force feeding her. Her weight went back up to six stone and six weeks later she was discharged. Keira managed to maintain that weight over the next few months but her old habits crept back in and in January 2011 she relapsed again.

By July last year her weight had dropped to just 4 stone 12lbs and she collapsed and was rushed to hospital, where she was sectioned under the mental health act. Doctors told Keira that her heart could give out at any moment and it was touch and go whether she would live. Her body mass index was just 13.5

It was then that she was admitted to specialist eating disorders unit in the Cotswolds, where she spent the next nine weeks. Keira credits this with her recovery as it was geared towards treating the illness rather than just force feeding her.

A year on and Keira is now in recovery. She now weighs six and a half stone and still has 10lbs to go before she reaches her target weight of over 7 stone. She says she has a much healthier relationship with food now and eats three meals a day plus snacks, although she still eats healthily. She is determined to beat the illness and wants to inspire other girls to recover from anorexia.

If you have beaten anorexia and would like to share your story, email us on message@talktothepress.com or fill out the sell my story form to the right.

Talk to the Press
← Previous Story Coverage in Mirror, Express and Sun newspapers for the husband whose wife was killed by IVF
Next Story → I’ve beaten cancer four times – and I’m only 30!