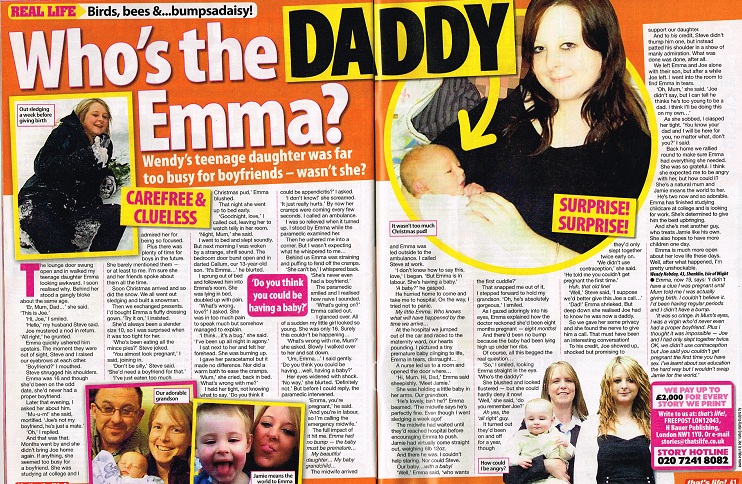 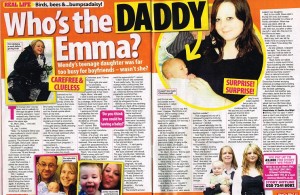 This week, 19-year-old Emma Hobday’s amazing story appears in That’s Life magazine. Emma was blessed with a surprise baby – but in Emma’s case she didn’t even know she was pregnant until she went into labour!

In That’s Life magazine, she and her mum Wendy tell how they initially put Emma’s stomach cramps down to a tummy bug. But when the pains got worse overnight, Wendy called for an ambulance. To their shock, the paramedics announced that Emma, then 16, was in fact nine months pregnant and in labour.

She was rushed to hospital, where she gave birth to a little boy Jamie, now two, just five minutes after arriving. Jamie weighed a healthy 6lbs 12oz despite Emma having no visible baby bump.

Emma says her life changed overnight. Before that she had been studying at college and hadn’t a care in the world. She had recently started seeing a guy who she had lost her virginity to but they had only slept together twice and she had no idea she was pregnant.

For nine months, Emma had no idea of the life growing inside her. Her periods had continued as normal and when she put on a couple of pounds she put it down to Christmas excesses as she could still fit in her size 10 jeans.

Sadly Emma and her boyfriend split up shortly after Jamie’s birth, but with her family’s support Emma was able to go back to college after the birth. She says: ‘I never planned to be a teenage mum but I’m so glad I’ve got Jamie now. I don’t know what I’d do without him.’

If you’d like to see your story in That’s Life magazine, email us on message@talktothepress.com or fill out the sell my story form to the right.