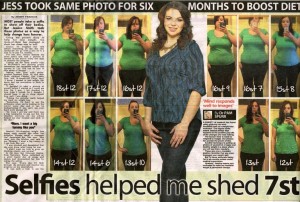 Most children idolise their parents but when Jess’ four-year-old daughter said she wanted a ‘big tummy’ like hers she knew she had to do something drastic about her weight. Worryingly, Phoebe started crying when a mum at the school gates commented on how ‘skinny’ she was.

Although it was supposed to be a compliment, Phoebe ran home to her mum in tears and said she didn’t want to be skinny and wanted a ‘big tummy’ like hers. Jess was devastated and felt like she’d let her daughter down and unwittingly taught her that being obese was healthy.

So she decided to do something drastic about her weight and shed seven stone in six months – taking her from a size 26 to a 12. She took selfies everyday in the same clothes in front of the mirror to help keep her motivated and keep on track of her weight loss.

Today, the mother-of-three says she’s healthier than ever and warns other overweight mothers about the bad example they’re setting to their children. On a daily basis she would eat McDonalds 3 times a week, takeaways once the kids were in bed, graze on cakes out of boredom. She would meet up with other mums and have a bacon baguette, a hot chocolate doused in cream and full fat coke after. Even though fat photos would depress her they weren’t enough ‘thinspiration’ to make her shift the bulge.

But in March 2012, she got the wake-up call she desperately needed. When her daughter said she wanted to be fat like her, Jes says she felt as though she’d been punched in the stomach.

She decided to go on the Cambridge diet as she’d done it before and had lost a few pounds on it. But whereas in the past she would cheat, she says this time she took it seriously. Taking ‘Selfies’ so she could monitor her progress only kept her inspired.

Jess now weighs 12 stone but her target weight in 10. ‘I love my new life,’ says Jess, a full time mum who lives with Ryan and Phoebe, now five, Ethan, now three, and Cerys, now 15 months in Wales. ‘Although I was devastated at the time by my daughter’s comment, it was the best thing that ever happened to me. It really gave me the wake-up call I so desperately needed.’

Talk to the Press
← Previous Story Nearly killed by MRSA, but my life was saved by revolutionary copper pyjamas
Next Story → ﻿Happy reunion story for the New Year – read our client Mary’s story of finding her long lost sister in this week’s @thatslifeuk magazine