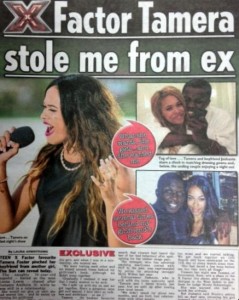 With X-Factor back on our screens, national newspapers and women’s magazines are desperately looking for X-Factor stories. So if you’ve got an X-Factor story to sell, now is the time to do it.

Yesterday, our story on X-factor favourite Tamera Foster appeared in the Sun newspaper. In it, her boyfriend Joshante described how the two of them are fiercely ambitious and will go ‘all the way’.

When the couple met, Joshante was already in a relationship, but he says Tamera went out of her way to snare him and he ended up ditching his ex-girlfriend as a result. Although the pair have suffered from trust issues in the past, he says they’re stronger than ever and they want to be the next Jay-Z and Beyonce.

Joshante, now 20, says he grew up in a rough part of south London and was determined to avoid slipping into gang culture and wanted to make something of his life.

Whereas his peers were getting into trouble, at just 12-years-old Joshante was setting up a tuck shop in school selling donuts and making a profit of £40 a week. Shortly after, he won Student of The Year Award and was tipped as the next Richard Branson. Despite gaining average grades at GCSE, Joshante continued to put his entrepreneurial skills to the test. Through social media he gained a big following on Facebook, Twitter and Instagram and decided to set up big parties/ events.

He struck an arrangement with exclusive nightclub Anaya in Mayfair on the basis that if he got 250 punters through the door, he’d keep the entry fee of £10 each and they’d keep the money made at the bar. Soon, after all his overhead costs he was taking home £3,000 after one night – the equivalent of somebody on a £50,000 salary.

But he didn’t stop there, whilst at college he got into trading. And he’s recently just set up a recruitment agency with a friend.

Determined to be an inspiration to others, he encouraged Tamera to seize her dreams on X-Factor.

‘It’s easy to fall into the wrong crowd when you’re brought up in a rough area,’ says Joshante. ‘When Tamera tells me she’s going to be the next Beyonce, I believe every word she says and have faith in her that she will. Our friends have dubbed us the next Jay-Z and Beyonce because we’re young, successful and have fire in our bellies.’

Talk to the Press
← Previous Story Why we’re a reputable press agency for selling stories – download our customer charter
Next Story → Publicity for a book? – Talk to the Press helps Rosemary Locock promote her book about her inspirational daughter