Selling your story internationally: how we secure multiple deals for your story with publications around the world 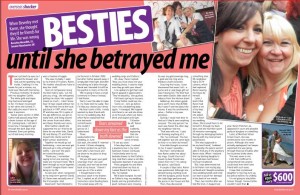 Our job is to get you as many deals for your story as possible, and to make sure you recieve the highest fee for each deal as we can. One of the way we maximise the value of your story is to help you with selling your story internationally, as well as to the British press. Countries such as Australia, Germany, South Africa and France have very similar publications to ours and are looking for similar types of stories. We are in contact with editors from publications in all these countries – and more.

This week, our client Beverley Meredith’s story appears in Australia’s That’s Life magazine. We’ve also secured her several deals with British magazines and will be getting her newspaper deals too. All in, Beverley will have earned several thousand pounds for her story.

When Beverley met Karen Fletcher she thought they’d be friends for life. And for 26 years, Karen was a good friend to Beverley and a great support when her beloved daughter died at 29 a brain tumour five years ago.

But bizarrely, last year, Karen broke into Beverley’s house in Manchester and spent 45 minutes rummaging through Beverley’s most prized possessions before stealing them. Incredibly, she stole Beverley’s wedding rings and her dead daughter’s jewellery too. After, she was caught on a neighbours CCTV loading her car with bags of Karen’s belongings.

In October, Karen Fletcher was convicted of burglary in a dwelling at Manchester Crown Court and Fletcher, who had no previous convictions, was jailed to nine months in prison. But the judge said her behaviour was ‘diabolical’ and was ‘disgusted’ at how a close friend of 26 years could betray someone’s trust and steal items from her deceased daughter. Bev wanted to do her story to earn money, but also name and shame her former friend.

If you’re looking to earn money selling your story, the route to a top payment is by selling it multiple times as to as many publications as possible. It would be very difficult to do this without a good press agent.

So get in touch for more information about securing multiple deals for your story, and about selling your story internationally. Email us on message@talktothepress.com or fill out the sell my story form to the right.