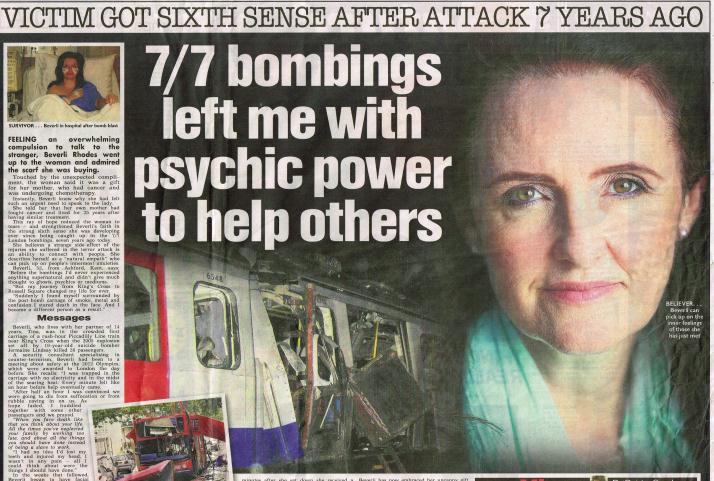 7 7 terrorist attack survivor shares her story with The Sun

Earlier this month Beverli Rhodes, 52, a survivor of the 7/7 bombings, spoke exclusively to The Sun about how she’s developed physic abilities since staring death in the face seven years ago. Beverli, a consultant who used to specialise in counter-terrorism, developed these ‘special powers’ three years after her horrific ordeal.

At first Bev was embarrassed by her ‘powers’ but now she’s embraced her gift which she believes was triggered by her head injury she suffered seven years ago. She believes it unblocked a channel in her brain which her exceptional intuition and empathy towards others – which can help them with their spiritual journey through life.

A few weeks ago Bev felt an overwhelming compulsion to go up to a stranger in a shop and admire the scarf she was buying. Touched by the unexpected compliment, the woman said it was a gift for her mother who was undergoing chemotherapy.

In a monumental coincidence, Beverli’s own mother had fought cancer and had survived for 25 years after similar chemo sessions. Beverli shared her experiences of her own mother and the woman burst into tears of joy.

Beverli realised she’d brought a message of hope and positivity into her life. Strange occurrences like this have only started happening to Beveli since she was caught up in 7/7. In the aftermath of the attack she suffered from post-traumatic stress disorder and guilt because she survived. To try and stay focussed, she wrote a bucket list of things she wanted to achieve and ticked them off as she did them.

‘My life has changed dramatically since 7/7 and I’m now writing a book to help other survivors cope with the guilt of surviving and learning how to live again,’ says Beverli.

If you have survived a terrorist attack and would like to share your story, email us on message@talktothepress.com

Talk to the Press
← Previous Story National newspaper coverage for the baby whose cancer was mistaken for a birthmark
Next Story → Press coverage in the Sun, Telegraph, Daily Mail and Daily Mirror for mum Natalie Tung