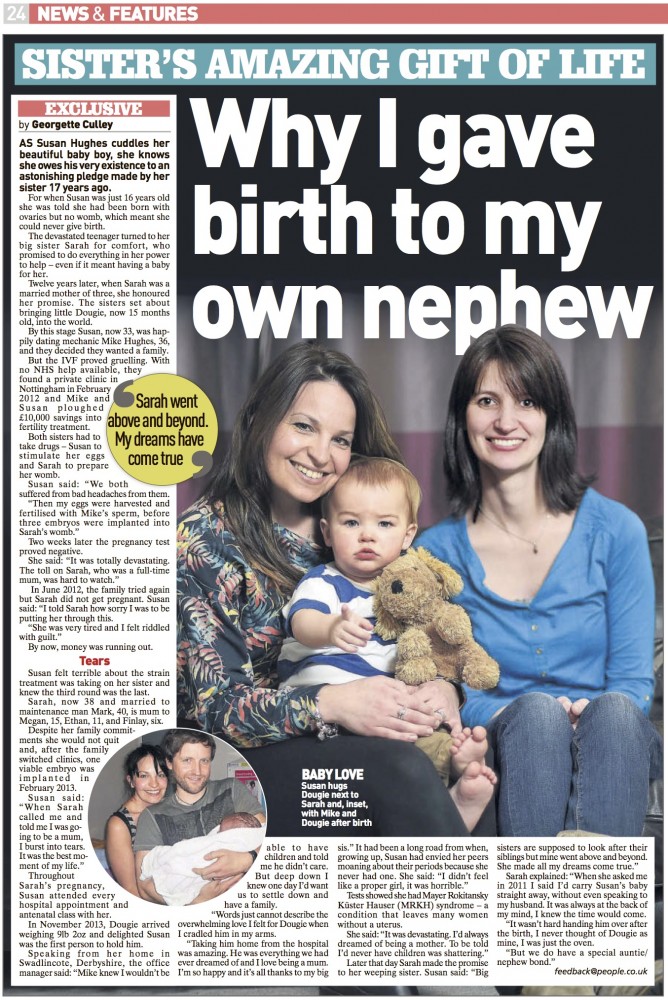 My Sister Gave Birth to My Baby 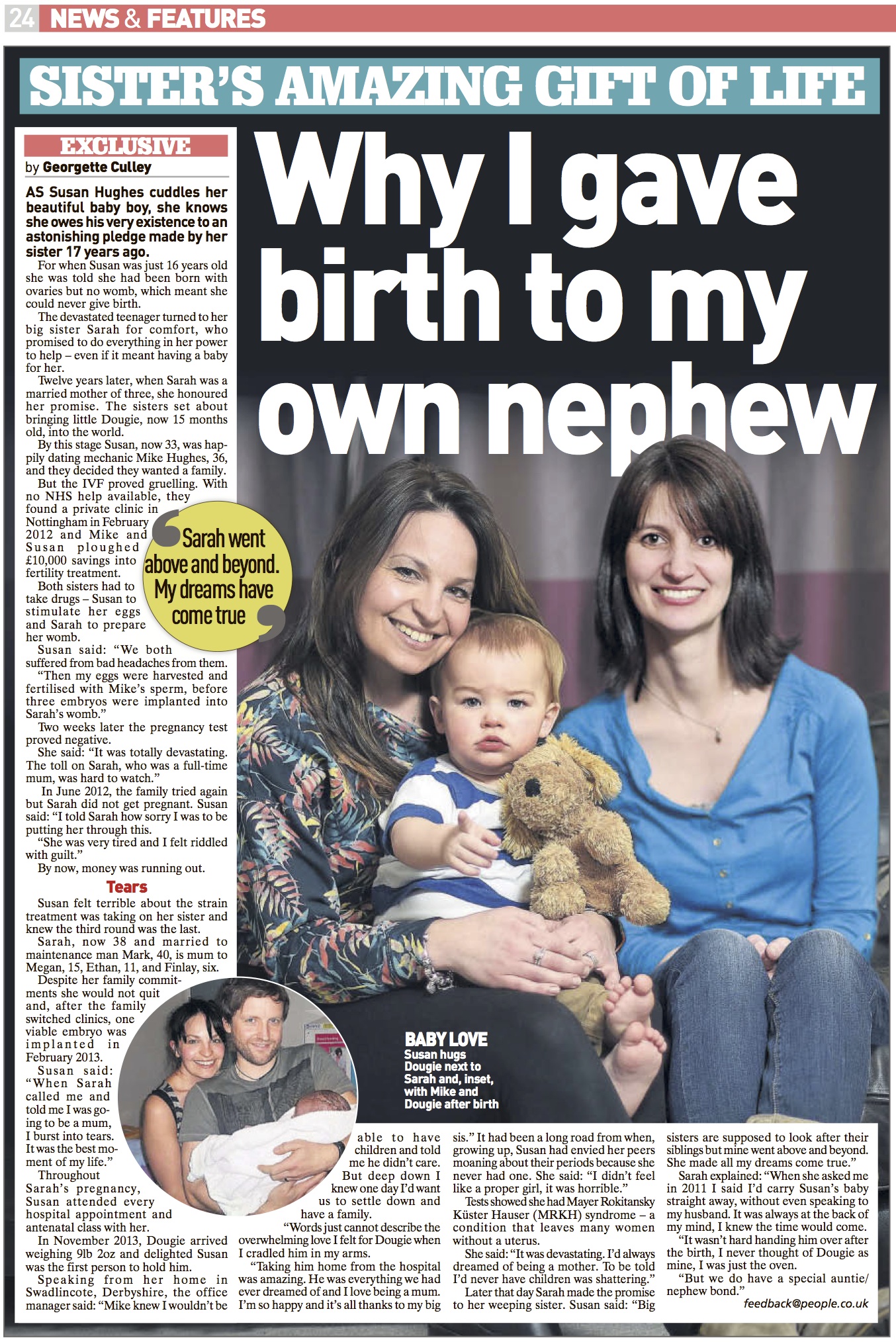 WHEN Susan Hughes was told at just 16 she would never have children, her big sister Sarah took her hand and made an extraordinary pact. In that moment, she promised to do ‘everything in her power’ to make Susan a mother – even if it meant having a baby for her. Not many people can say ‘My sister gave birth to my baby’.

True to her word, 12 years later, Sarah made good on her promise, becoming a surrogate for her beloved sister’s first born.

Susan’s was born without uterus and could not carry a child, but she still had ovaries and, through IVF, her eggs could be harvested – which meant she could have a biological child. After two failed attempts at IVF, Sarah, 38, finally became pregnant.

In November 2013, she gave birth to her nephew, Dougie, now 15 months. Delighted Susan, 33, an office manager, was the first person to hold Dougie in her arms. It was an emotional moment for both of them – a moment Susan never imagined she would experience.

Speaking exclusively from her home in Swadlincote, Derbyshire, she told the Sunday Mirror: “Big sisters are supposed to look after their younger siblings, but mine went above and beyond.

“She made all my dreams come true and is the best aunty in the world to Dougie.”

Sarah added: “I said I would carry Susan’s baby straight away, without even speaking to my husband, it was always at the back of my mind and I knew eventually the time would come.

“I always keep my promises, I had no intention of ever breaking it. It wasn’t hard handing him over after the birth, I never thought of Dougie as mine, I was just the oven.

“We have a special aunty nephew bond though.”

Growing up, Susan never had a period and envied her peers who were moaning about theirs.

She recalls: “I didn’t feel like a proper girl, it was horrible.

“All my friends were complaining about their stomach cramps but I desperately wanted to experience it.”

Tests revealed she was suffering from Mayer Rokitansky Kuster Hauser (MRKH) syndrome – a condition that affects the reproduction system and many females born without a uterus. She said: “It was devastating. I’d always dreamed of being a mother and carrying my own child. To be told that I’d never be able to have children naturally was shattering.”

Later that day she went home and cried to her sister, Sarah. “She took my hand and made a pact with me,” explains Susan, “she told me that when they day came and, I wanted children, she would carry them for me.

Aged 25 started dating her friend, Mike Hughes, 36, a mechanic. She said: “We’d known each other for years, so he knew I wouldn’t be able to have children. He told me he didn’t care but deep down I knew that one day I’d want us to settle down and have a family.”

After three years, the couple started to discuss their options and Susan told Mike about her pact with her sister. Sarah, now a married mum of three said she would stick by her promise. With no NHS support available, the pair ploughed £10,000 of savings into fertility treatment and after two failed attempts at private clinic Nurture Fertility in Nottingham, the family went to Midland Fertility Service in November 2012. And in February 2013, Susan was given the news she thought she’d never hear: Sarah had conceived and was carrying her child.

Susan said: “Sarah called me eand told me I was going to be a mum,” she recalls, “I burst into tears. It was the best moment of my life.”

“I was the first one to hold him,” tells Susan, “words can’t describe the overwhelming love I felt for him when I cradled him in my arms. He had no idea how much we’d been through to have him. Taking Dougie home from the hospital was amazing.

“He was everything we had ever dreamed of, and I love being a mum. I’m so happy to have a perfect family, and it’s all thanks to my big sis.”

We placed Susan’s story with the Sunday Mirror and are in the process of securing Susan magazine and TV deals. If your sister has done something remarkable for you, we’d love to hear from you.

Simply complete our quick story valuation form on the right hand side of this page. One of our team will get back to you within 24 hours. You only need to give us the basics so that we have an idea of what your story is about.

To read more about selling a story to the press, click here.