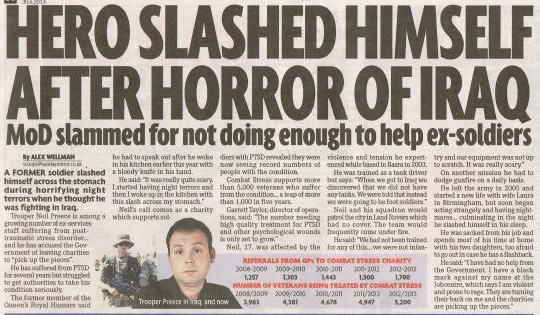 Soldier suffering from PTSD shares his story with the Sunday Mirror 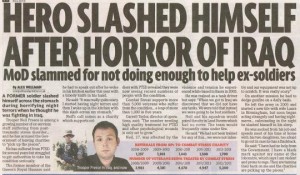 Neil Preece, 27, is a former soldier and tank driver who served in Iraq in 2003 on the front line. During his time in Iraq, Neil, a dad of two, lived in constant fear of being shot and had to endure locals throwing bricks at him and his fellow soldiers as they drove around in open top vehicles.

He and his comrades were also ambushed and attacked on several occasions. Today, having left the army, Neil suffers from extreme PTSD.

In a horrific incident just last year, Neil’s illness saw him slash open his own stomach with a kitchen knife. He had been experiencing night terrors, and had dreamt he was back fighting Iraq. The wound was 4 inches, and required 5 stitches.

He also suffers from paranoia, rage, anxiety, anger outbursts, and hallucinations, and regularly succumbs to ‘episodes’ of one or the other. Today, he and his wife Laura and his two daughters, Annabelle, 2, and Gracie-May, 4-months-old, don’t know where to turn and we arranged for them to speak to the Sunday Mirror newspaper about their plight.Laura, 27, a care worker, says government’s treatment of former soldiers is shameful. Neil has been unable to work and now they are about to lose their home.

The Preece’s say the lack of financial help available to them is shocking. Neil can’t claim jobseekers because his wife’s earnings are too high (Laura is on statutory maternity leave pay), and because Neil has stopped working, their working tax credits have stopped as well.

He says his GP fobs him off with high dosage anti-depressants and the counsellors he’s been referred to by his GP do not truly understood his condition. The couple feel the government should be doing more to help former soldiers like Neil.

If there’s an issue you’d like to talk about, fill out our sell my story form to the right, or email us on message@talktothepress.com