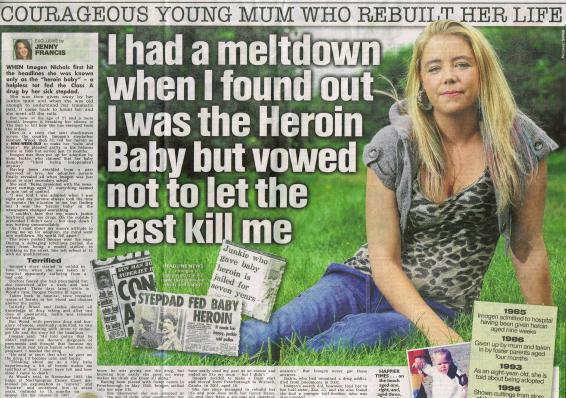 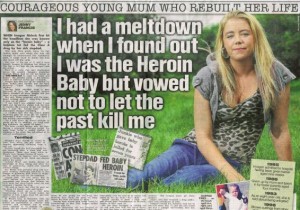 Imogen Nichols, 27, made national news headlines when she was just nine weeks old because her junkie stepdad fed her heroin twice. Astonishingly, her step dad claimed that heroin made her a ‘happy and contented baby.’

And recently, Imogen, a mother of one, got in touch with us wanting to speak out about the effect the scandal had on her upbringing – and why she’ll never make the same mistakes her mother did. We placed her story with The Sun newspaper.

In June 1985, in a story that shocked the country, Graham Wood, then 32, put heroin on the tip of his finger and into Imogen’s mouth to stop her from crying hysterically. Imogen was hospitalised twice and tests later revealed traces of the drug in her body – leading to Wood’s arrest. Both Wood and Imogen’s mother, Jackie, then 33, denied all knowledge of wrongdoing. But Wood was subsequently charged with two counts of poisoning with intent to harm.

In November 1985, he told Northampton Crown Court that he was trying to help her and thought a small amount of heroin would settle her. Wood admitted two charges of administering poison so as to danger life and was jailed for seven years in December 1985. Meanwhile, Imogen’s drug addict mother, Jackie, had given her baby girl up adoption because she liked being ‘independent’.

Imogen went to live with a loving foster family in Peterborough who adopted her as soon as they got the chance. At eight Imogen overheard her parents talking about her adoption. They explained what adoption meant but didn’t tell her the full story until she was a bit older. When she started secondary school they sat her down and showed her the press cuttings.

Imogen couldn’t take it all in and went off the rails. She started drinking, smoking and hanging out with the wrong crowd. But at 16, Imogen finally faced her demons. She moved away from Peterborough, and the wrong crowd, and got a job in Argos, in Wisbech. Soon after, she met Daley, 26, and fell in love. In 2005, Imogen gave birth to a healthy baby girl, Libby, now six. Imogen and Daley are now engaged and have lived successfully together for eight years.

Despite Imogen’s newfound happiness, her past still haunts her and a few years ago she tried to contact her biological mother. But she was unable to get the answers she longed for as Jackie had died from pneumonia in 2002.

‘My world fell apart when I found out what happened to me as a baby,’ says Imogen, who lives in Wisbech with her fiancé and young daughter. ‘I couldn’t imagine letting a scummy man like Wood around my daughter. But despite my start in life, I think I’ve done pretty well. I’m glad I didn’t end up like my mum.’

We placed Imogen’s story exclusively with the Sun. If you have made national headlines and want to have your say, email us on message@talktothepress.com or fill out the sell my story form to the right.

Related Itemsheroinheroin as a babysell story to the SunSun exclusive story