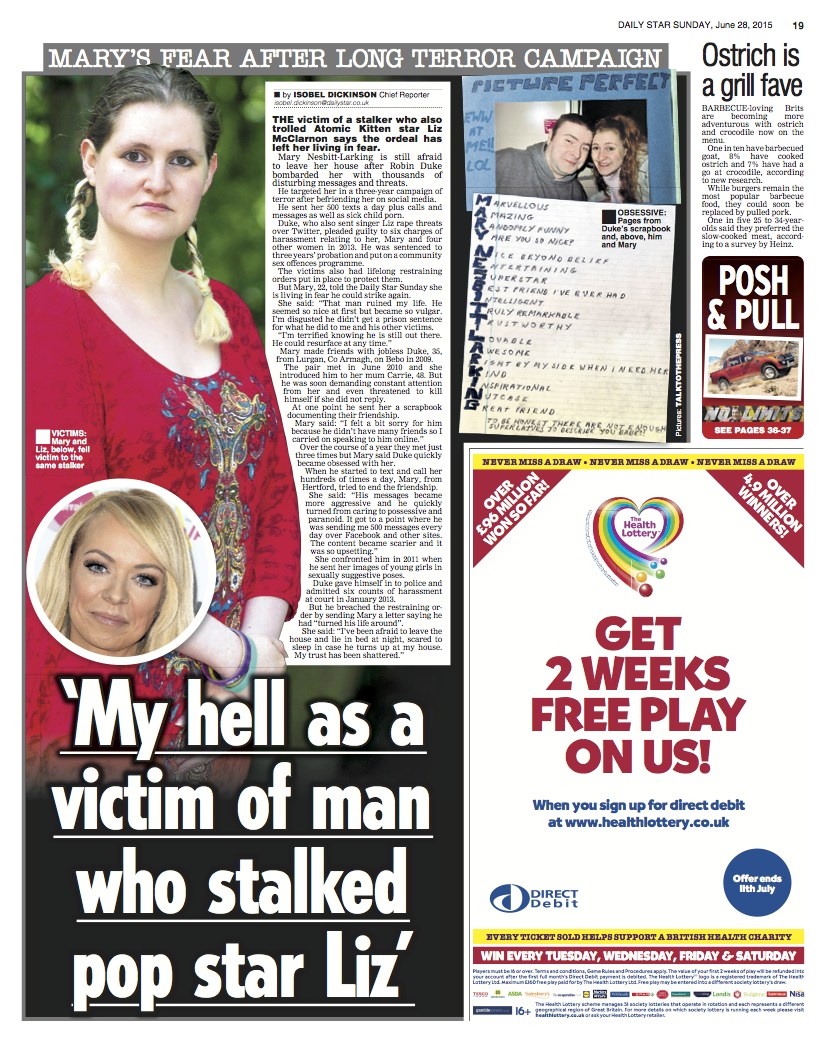 Last week we placed stalker victim Mary Nesbitt-Larking’s story in The Daily Star Sunday where it appeared as a page lead.

Mary told how she was stalked by the same man who harassed Atomic Kitten star Liz McClarnon. The 22-year-old woman told how she received 500 texts and Facebook messages from deranged Robin Duke, 35, over the course of three years – while he stalked the pop star at the same time.

Deranged Duke hit national headlines in January 2013 when he pleaded guilty to six charges of harassment against six victims, including Liz McClarnon – who he had threatened to rape on Twitter.

He was sentenced to three years probation and a community sex offences programme, as well as drug and alcohol counselling. Restraining orders to protect his victims were also imposed.

Mary spoke candidly about how Duke’s reign of terror had affected her, leaving her scared to go out in the fear he might strike.

How we secure the best coverage for your story

At Talk to the Press, our aim is to get you as much media coverage as possible (if that is your target) and ensure you receive the best fees available for your story.

Generally, we aim to place the exclusive ‘first rights’ for your story with a national newspaper. After it runs in the publication as an exclusive, we will try and secure two magazine deals and an appearance on a daytime TV show – such as This Morning and Good Morning Britain (but only if you tell us that is something you would be interested in).

With every media you do we will ensure that you receive a fee as well as copy approval for every interview.

Getting a quick offer for your story

We can get you an offer on your story within 24 hours (48 hours at the latest if you send your story over a weekend). All of our contacts are high up (such as editors and commissioning editors) so we bypass junior reporters on the desk and go straight to the decision-makers.

We’re here to negotiate the best deal for you and ensure you’re paid what you’re promised.

If you’re not happy with an offer we secure you, you’re not obliged to go through with anything and the information you have passed on will stay completely confidential.

One of our dedicated team will get back to you ASAP. We would ask that you don’t speak to any other journalists, agencies or publications directly whilst we’re trying to secure you an exclusive deal. If you do it could compromise any deals will secure you in the future (all of the publications offer the best fees for absolute exclusivity, so if you have told other media outlets about your story, it could jeopardize the exclusivity of your story).