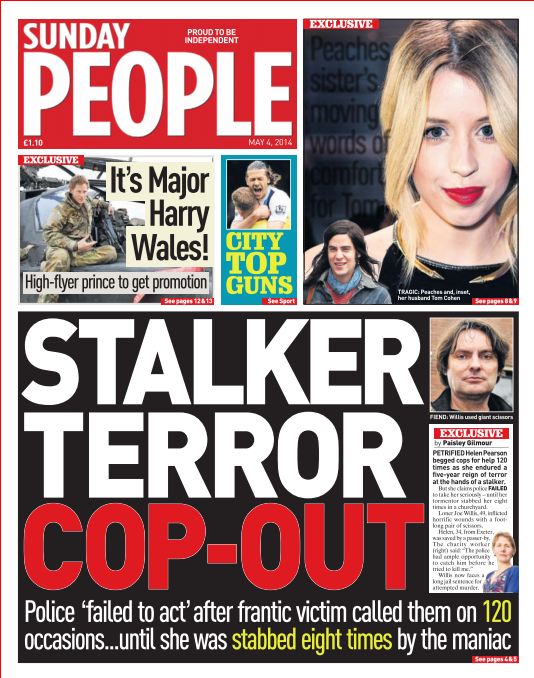 Helen Pearson 34, was subjected to five years of terror in which her deranged stalker sent death threats, painted ‘DIE HELEN DIE’ on walls near her home and killed a cat and left it on her doorstep. Her attacker was only caught after he took her to a cemetery and repeatedly stabbed her in the face, neck and back with a huge pair of dress-making scissors.

This weekend, we secured Helen a deal for her story which saw her featuring on the front page of the Sunday People newspaper.

Helen says she feels incredibly let down by police who dealt with her stalker in the years leading up to the attack, and that her claims were never taken seriously. She has a 30 page dossier detailing the 125 reports she made to the police of the crimes being committed against her.

Two weeks ago, Joe Willis was finally convicted and is due to be sentenced later this month.

Joe Willis met Helen in 2009 when she moved into the same block of flats as him and his mother. Willis, 49, began terrorising her in 2010 after he asked her out on a date and she turned him down. Over the next five years he threw bricks through her windows, slashed the tyres on her car, went through her bins and even attacked her parents’ car and home – a total of 125 reported crimes. 23 letters were sent to the victim and her family, asking her to play a game with him and revealed that he knew personal information about her.

He even raided her bins and posted a used panty liner to one of Helen’s friends. During this time, Helen was so afraid she couldn’t sleep or leave the house – and she even stopped seeing her friends and family because she feared it would put them in danger. Then, in October 2013, he tried to kill his terrified neighbour by stabbing her eight times with a pair of scissors.

Helen is now lodging an IPCC complaint against Devon and Cornwall police in the hope that victims of stalkers will be taken more seriously.

She told the Sunday People newspaper: ‘These stalking crimes need to be investigated from the very beginning. The police need a specially trained officer to deal with victims and they need to be proactive instead of reactive,’ she explains, ‘it took five years of hell and an attempted murder for them to take me seriously. That whole time I felt totally alone and vulnerable and like there was no one there to help me.’

Talk to the Press
← Previous Story TTTP client to visit Downing Street after newspaper publicity and appearance on Good Morning Britain
Next Story → TTTP celebrating as we reach finals at the National Association of Press Agency awards!