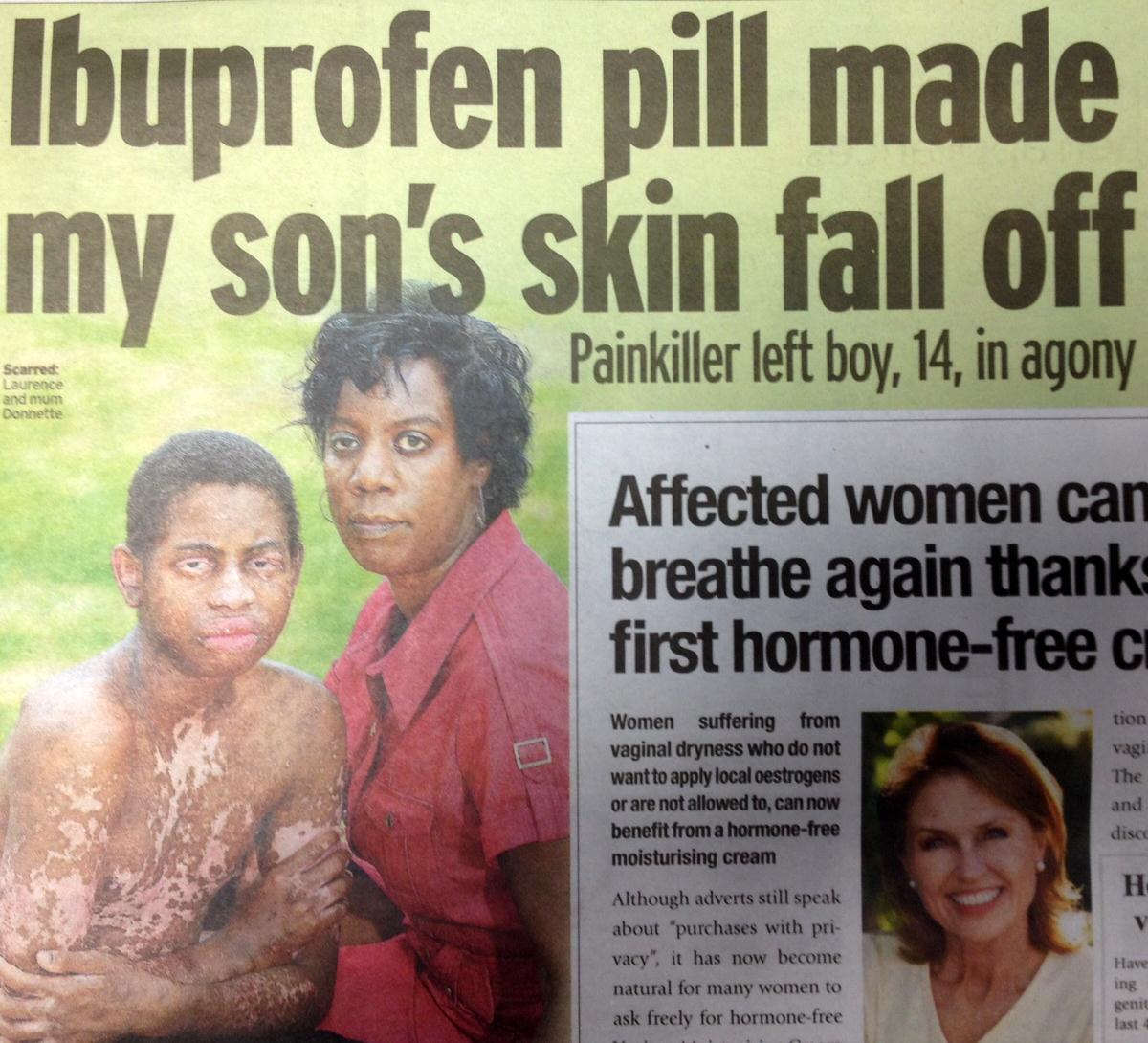 As soon as we spoke to Donnette McCalla about her son Laurence’s terrifying experience with Stevens-Johnson Syndrome, we knew a newspaper would be interested.

And at the weekend, we placed their story in the Sunday Mirror newspaper. She wanted to raise awareness about the dangers of Ibuprofen and raise awareness of Stevens-Johnson syndrome after what happened to her teenage son.

Laurence, 14, from Romford, spent TWO MONTHS in hospital and lost his hair and 65% of his skin after taking ibuprofen for a sore throat.

He was diagnosed with Toxic epidermal necrolysis – a rare, life-threatening skin condition which causes the top layer of skin to detach from the low layers of skin all over the body. He slipped into unconsciousness and was put on a ventilator – and lost a staggering two thirds of his skin.

The traumatic series of events started when his mum, Donnette, 50, a charity worker, noticed that her son wasn’t well so gave him a 200mg tablet of ibuprofen. As a teenager, this was the first time Laurence had taken the household brand. But soon his lips had filled with water and his skin was covered in blisters which began to burst.

In hospital, Laurence was heavily sedated and put on a ventilator, but there is NO cure so Donnette had to wait and see if Laurence pulled through. But thankfully after two months in intensive care he was well enough to go home. The youngster is now back home in Romford, but he will be scarred for life and needs skin grafts, counselling and eye treatment to stop him from going blind.

Mum-of-two Donnette said: ‘We are just so lucky to have him here with us, we were told that he had a 10-30% chance of survival. ‘It was terrifying, he was covered in blisters. Even his eyes were blistered; it looked like he had big red caterpillars under his skin.’

If there’s an issue you’d like to raise awareness about, or you’d like to sell your story about Stevens-Johnson syndrome, email us on message@talktothepress.com or fill out the sell my story form to the right.

Talk to the Press
← Previous Story Being me at last – TTTP client shares true sex change story in this week’s Chat magazine
Next Story → ‘I know I’m destroying my family, but I can’t stop’ – our client shares her gambling addiction story with the Sunday Mirror newspaper