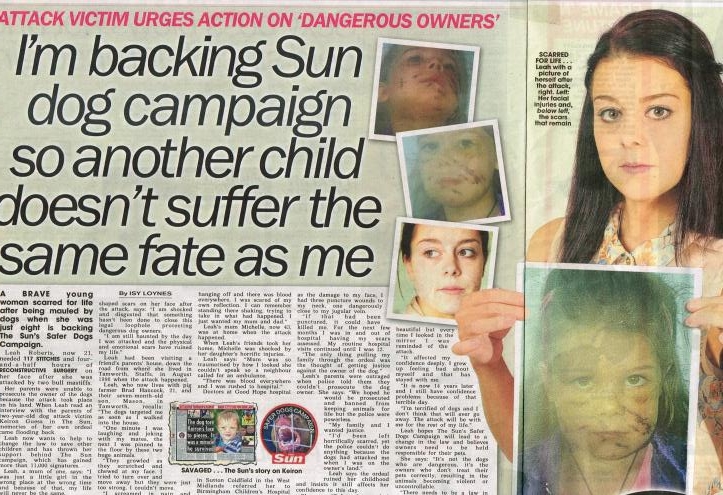 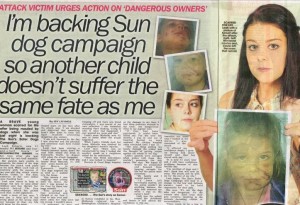 Child dog attack victim, Leah Roberts, now 21, got in touch as she wanted to speak out about the legal loophole in the Dangerous Dogs Act following the recent cases of two young children who were mauled by dogs on the owners’ property last month.

Leah was just eight-years-old when her friend invited her to play round his stepdad’s house, where she was atatcked by two six stone Bull Mastiff dogs. Half of Leah’s cheek was hanging off and she needed 117 stitches to her face. She also had three puncture wounds to her neck, dangerously close to her jugular.

Leah’s parents reported the stepdad to the police but were distraught when they were told they couldn’t take action because the unprovoked attack took place on his property. After four days the stepdad finally agreed to have the dogs put down. But Leah doesn’t think that’s enough. She believes the owner shouldn’t be allowed to have dogs again because he brought them up to be violent.

Over the months and years which followed, Leah’s life changed dramatically. She went from being an out-going girl to a withdrawn, insecure shadow of her former self.

Luckily today her scars have now faded and they are difficult to see – especially when she wears make-up. But Leah is still affected by the trauma she went through as a child. Leah is calling for a change in law as she believes if the dogs will attack in their own home then they are more than likely to attack when they are outside too.

She believes there is too much emphasis on branding certain dogs as ‘dangerous’ when the real onus of responsibility lies with the ‘dangerous owners’ – who have trained the dogs to behave violently and cannot control them in unpredictable situations. She also wants to share the legacy that being savaged by a dog as a child as had on her life.

Today, Leah appears in the Sun newspaper, where she is backing their dog campaign to see ‘dangerous owners’ held accountable.