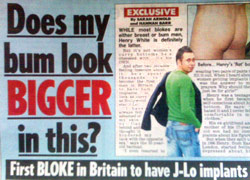 When Henry White realised he was the first man in the UK to have J-Lo style buttock implants, he knew he had a story to sell. Henry’s story first appeared in the Sunday Mirror which was to be the beginning of a frenzy of media activity for him. He went on to give interviews to a number of women’s magazines and even appeared in a documentary.

Talk to the Press
← Previous Story Sunday Mirror – ‘My brave testimony made British legal history’
Next Story → Fabulous – ‘I thought I had no family, then my mum, dad and four sisters found me.’