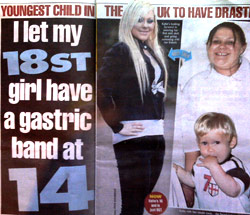 Sunday Mirror – ‘I’m the youngest person in the UK to have a gastric band.’

‘I think you’ll be interested in my story,’ wrote Juliet Hill when she filled out our story submission form. And Juliet was right! Having battled with her own weight for most of her life, Juliet had a gastric band fitted three years ago. A year later, her daughter Katie, who had also struggled to control her weight, then became the youngest person to have a gastric band in the UK when she had the op at 14 years old.

Their story was sold to the Sunday Mirror and a number of women’s magazines. Katie has since often appeared in newspapers and on television talking about her story.