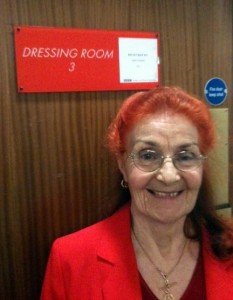 Ever since pensioner Ann Timson became an overnight celebrity and national heroine, we’ve been helping her manage press attention. And if you were watching Channel 4 last night, you’ll have seen her appear on the Big Fat Quiz of the Year.

Ann of course is the grandmother who was filmed bashing armed robbers at Northampton jewelry shop with her handbag. The footage went viral and Ann awoke the next morning to find the world’s press camped on her doorstep.

We stepped in to help Ann and her family take control of the situation and have since secured her a string of deals, which saw her interviewed by newspapers and ITV News, fly first class to New York to appear on the Today show and appear on Australian and Germany television too. The latter even whisked Ann and her son for a Christmas trip to Germany to visit local markets. In the summer, Ann was also honoured with a Pride of Britain award. And thanks to her bravery, those responsible for the robbery have been sent to prison.

At Channel 4’s Big Fat Quiz of the Year, Ann was delighted to see she had her own dressing room with her name on the door. But she confessed that whilst she’d had a fantastic year, she hoped the media interest in her would die away so she can focus on her passions of ballroom dancing and community work. However, given the show’s celebrity panel including Jamie Oliver, Jonathan Ross and Miranda Hart gave Ann a standing ovation for her courage and humility, we’re not so sure this is the last people will hear from her. It’s been wonderful for everyone at Talk to the Press to work with Ann, and she and her family have become true friends of ours.

If you, like Ann, have press interested in your life or on your doorstep, get in touch to find out how we can help. Email us on message@talktothepress.com

Talk to the Press
← Previous Story Thanks to the Sunday Mirror for our bottle of champagne
Next Story → Are you a local newspaper reporter? Earn extra money with Talk to the Press