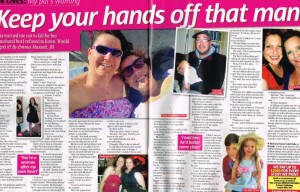 Best friends Emma, 28, and Fiona, 41, are used to being told their lives are like a soap opera. This is because after Emma moved next door to Fiona, she started dating Fiona’s ex husband Richard, which was awkward for Fiona.

Fiona even warned her that Richard would let Emma down. But Emma fell pregnant by Richard regardless. And when Richard dumped her suddenly at 6 months pregnant, and started dating another woman, it was Fiona who supported her throughout.

Now the two women, who are both mothers to Richard’s children, say their lives could form the basis for a film script, and contacted us to sell if they could sell their story. This week, their story appears in Take a Break magazine. Today, the two women are best friends who holiday together with their children. Both think agree they wouldn’t trust Richard as far as they could throw him. Fiona and Richard ended their 5 year marriage in 2006 after arguing too much. The mother-of-three, who has now re-married, moved out of their family home with their two children Bradley, 14, and Georgia,13.

However, her and Richard kept in close contact and Richard would come over to see his two children. Meanwhile, Emma moved into the house next door, and she met Richard one day at a BBQ hosted by Fiona. Afterwards, he asked her out.

Emma accepted and the couple began dating regularly – despite Fiona warning her that Richard might stray. After 2 years Emma and Richard decided to try for a baby after moving in together. But when Emma was six months pregnant, Richard dumped Emma and admitted he’d been cheating. Devastated, Emma continued with the pregnancy heart-broken. Fiona, after hearing about the break-up, went round to see if Emma was okay.

At first she refused to let her in, but after a couple of days the women got chatting. Fiona would phone everyday, take Emma out for lunch and help her with her pregnancy. Emma even later found out Fiona was the reason that Richard came clean about the affair – she told him that if he didn’t tell Emma then she would.

Three months later Emma gave birth to Lilly, now 2, who is the half-sister of Fiona’s children. And now the two families are inseparable. They go on holidays together and have become like sisters.

Emma says: ‘Fiona became my absolute rock during the break-up. She was always there for me and I couldn’t have got through it without her. I sometimes wish I had listened to Fiona’s advice about Richard and not dated him, but I don’t regret it because now I have my beautiful daughter and the best friend I could ever ask for. Sometimes when we get together we giggle about everything that happened, we feel like our lives are more dramatic than a soap opera.’

While ex-wife Fiona says: ‘I was never jealous of Emma and Richard because things between us had ended and I never wanted to go back there. I did think it would all end in tears, but I am glad Emma has come out on top. She finally saw sense!’