Talk to the Press client shares her story with Reveal magazine 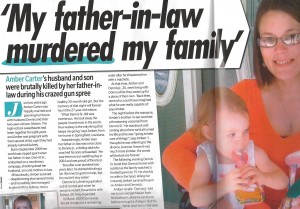 Just two years ago Amber Carter was happily married and planning her future with her husband Dennis and their two-year-old son Mason. The couple had been together eight years and Amber was pregnant with their second child, a girl they had already named Aubrey.

But in September 2009 Amber’s world was ripped apart when her father-in-law Dennis Sr embarked on a murderous rampage, shooting dead her husband, son and mother-in-law. Miraculously, Amber survived, despite being shot several times. Even more incredibly, her unborn baby was unharmed. When we heard Amber’s story we knew a magazine would want to feature her story.

The mum, who is 27 and from Louisiana in the US, appears in this week’s issue of Reveal, where she describes how the memory of that night will haunt her forever. She is also due to tell her story in Real People magazine.

Amber spent months in hospital recovering from the motiveless attack by Dennis Sr, a violent alcoholic who had recently separated from his wife, Dennis Jr’s mother. The attack has left her paralysed down one side and there are fears she may never walk again. Aubrey, however, is now a healthy 20-month-old girl and knows nothing of the trauma she went through in the womb.

What Amber went through was horrific, but she says her ‘beautiful little girl’ keeps her going through it all. She says: ‘To this day I can’t understand how Dennis Sr could do something so evil. I miss Dennis and Mason every day and it upsets me Aubrey will grow up without ever having met her dad and big brother. But I’m just so grateful I get to see my beautiful daughter grow up. And through her, a part of Dennis and Mason live on.’

If you have an incredible real life story to sell, email us at message@talktothepress.com.