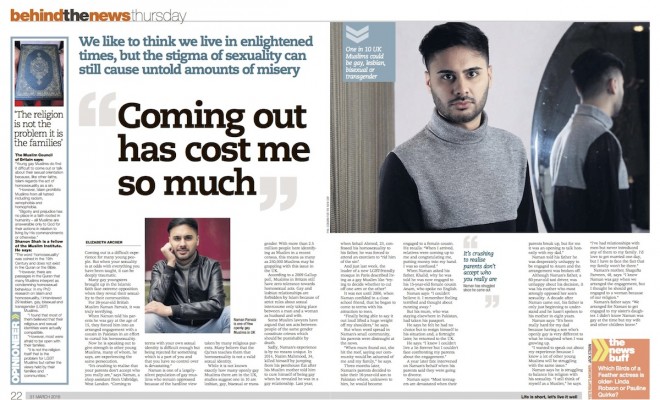 Talk to the Press: Coming out as a Muslim

Coming out as a Muslim: This week, we broke the story of a young Muslim whose parents forced him to get engaged to a woman after her came out as gay.

If you would like to get something off your chest and share your story with the world – Talk to the Press! If there’s an issue close to your heart which you’d like to raise awareness of, Talk to the Press can help.

Coming out is a difficult experience for many young people. But when your sexuality is at odds with everything you’ve been taught, it can be deeply traumatic. This was certainly the case for our client, Naman Parvaiz, who told us his experiences of coming out as a Muslim.

Not only did his parents disapprove, they forced him to get engaged to his female cousin in an effort to curtail his sexuality. Naman came out as gay when he was 15 years old, and describes how his parents ‘hit the roof’ when he told them.

The following summer, Naman arrived in Pakistan to visit family and wondered why relatives kept pressing money into his hand. When he asked his dad what was happening, his dad replied that his parents had arranged an engagement without his consent. Naturally, Naman was distraught and at a loss as to what to do. It took him a year to confront his parents on the issue, and thankfully they listened and called off the arrangement.

While Naman’s experience is deeply saddening, he is by no means alone. A prominent Muslim leader, Imam Ludovic-Mohamed Zahed, recently described being a gay Muslim as being like “trying to decide whether to cut off one arm or the other.”

Although some Muslim scholars argue that there is nothing in the Qu’ran which forbids homosexuality, negative attitudes towards it are often deeply ingrained in Muslim communities.

Brave Naman wanted to raise awareness in the mainstream press about the difficulties some lesbian, gay, bisexual and transgender (LGBT) people face in the Muslim community.

We knew this was an important discussion to bring to the media’s attention, so we secured Naman an exclusive deal with New Day – a new paper set up by the Mirror which aims to bring enlightened debates on current issues.

We ensured Naman’s story was sensitively told and that he was given control over how it was portrayed at every step of the process.

This week, his story appeared across a double page spread in the paper. What’s more, it later appeared on the Daily Mirror’s website, and was shared more than 1,400 times on social media.

Naman said: “This is an issue which has been on my heart for a long time. It’s crushing to realise your parents don’t accept a fundamental part of who you are.

“I wanted to speak out and show other young Muslims that they’re not alone. If my article even gives one person the courage to have an honest conversation with their parents, it’ll be worth it.”

Naman now hopes to speak about his experiences on national television and secure a deal with a magazine to raise further awareness.

He said: “I’m so glad I spoke out about my experiences. I’m thrilled with the article in New Day.”

Sell My Story to New Day magazine, or other publications: If you would like to share your story you can contact us using the contact form (Story Valuation Form) on this page. Whatever you send us is for valuation purposes only. Nothing will be shared without your consent and our service is 100% free.

You can read more about how to sell a story here: Sell My Story – How it Works

If you have been affected by this story, you can find more support about the issue of coming out here: http://www.stonewall.org.uk/help-advice/coming-out-0

If you would like to see some of our recent clients and latest news, you can see some recent Talk to the Press news below: