When is it time to name and shame a loverat? 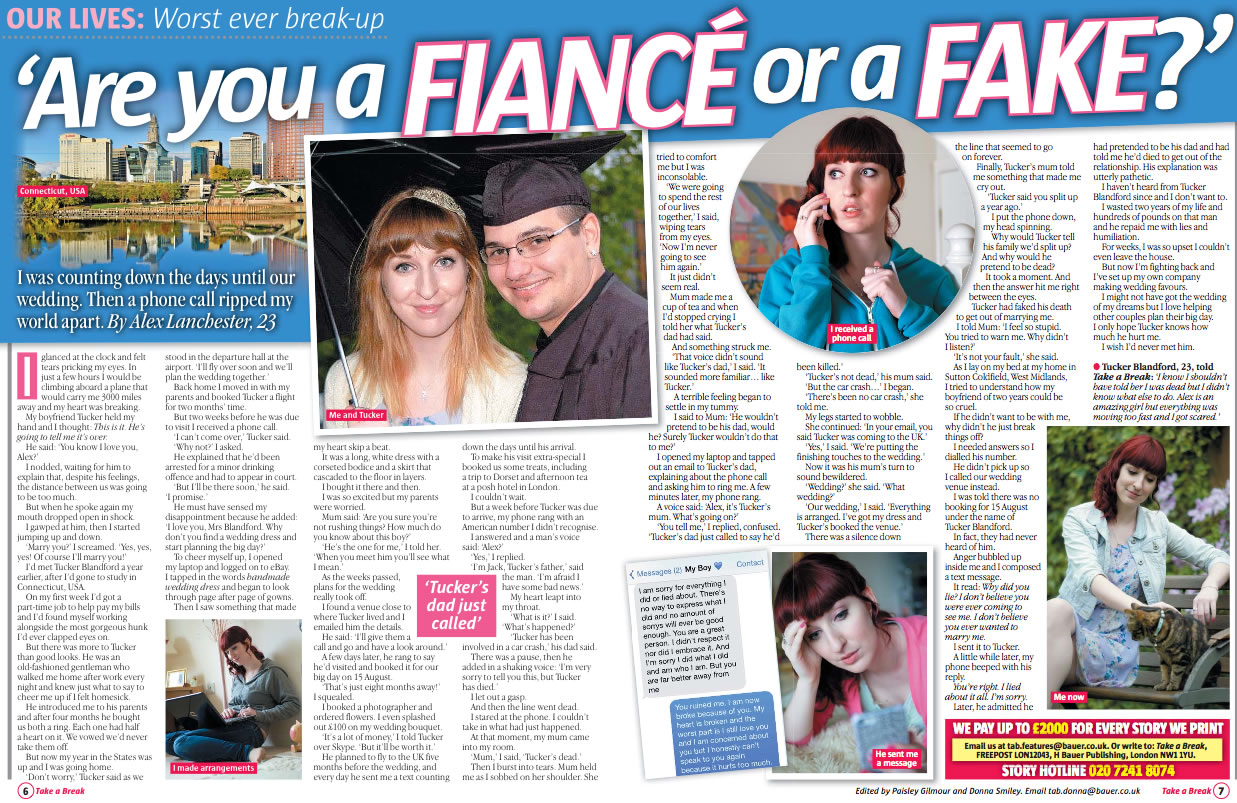 We are contacted on a weekly basis by victims of loverats, con-men and relationship scammers. In some cases the desire to approach the press is understandably an emotive decision. Many of these scoundrels have lied, conned, or cheated at the expense of another person’s feelings, wealth or even health – just to get what they want. In other walks of life it’s known as fraud, so why is it OK in love?

The answer is that it’s not OK. Many of these fraudsters, cheats and liars are serial offenders, using people’s need for love and affection against them. Of course, there are degrees of severity – but in the worst cases, is it your duty to warn others, help those in a similar situation, and expose the loverat to the world? When is it time to name and shame a loverat?

It’s always your decision, but if you’ve got a copy of this week’s Take A Break magazine, why not read our client Alex Lanchester’s story whose fiance went to the most extreme lengths to get out of their forthcoming marriage and keep all of the wedding funds for himself.

When 23-year-old Alex Lancaster got in touch with her story about her fiance who faked his own death to get our of their marriage, we knew a number of magazines and newspapers would want be to speak to her.

Studying on a year abroad in Connecticut, USA, Alex never imagined she’d meet the love of her life. But shortly after arriving, she met handsome, charming and funny Tucker Blandford, 23, and was swept of her feet.

After a year of dating and a whirlwind romance, the pair were devastated that Alex’s time in the US was coming to an end. When the day of her flight back to the UK rolled around, Alex was in tears at the thought of leaving the love of her life. Shortly before leaving for the airport, Tucker surprised her by getting down on one knee and asking her to marry him.

Ecstatic, Alex accepted his proposal and couldn’t wait to become Mrs Blandford. Although saying goodbye to her fiance was heartbreaking, she was comforted by the thought of their wedding and Tucker’s visit to the UK a few month’s later. The pair talked on the phone and texted constantly and Tucker told Alex to start planning the big day.

As well as arranging a wedding photographer, booking flights, and paying for the flowers, Alex splashed out on a custom handmade dress for her big day. When she found the venue of her dreams, she couldn’t wait to tell Tucker. Agreeing to marry in Connecticut on the university campus where they met, Tucker volunteered to put down the deposit and book the date,

As his visit to the UK edged closer, Alex couldn’t wait to see her fiance. She even booked a romantic weekend away for them in Dorset, a trip to Harry Potter world and an afternoon tea. Although she’d spent hundreds on the trips, flights and wedding preparations, Alex knew it was worth it to marry the man she loved.

But two weeks before Tucker was due to fly to London, Alex received a devastating phone call. The voice on the other end of the phone told her Tucker had been in a car crash… and was dead. Hysterical, Alex frantically called his mum.

But it quickly became apparent that something wasn’t right. His mother was taken aback and confused by her call and quickly told her Tucker was fine. Hanging up, the penny finally dropped. As Alex realised Tucker had lied about dying, she also remembered that the voice on the end of the phone sounded familiar too.

Distraught, she refused to believe that her own fiance would fake his own death to get out of their wedding. Later, she demanded answers from him and he admitted everything. But it quickly transpired that he had. Shocked at how he could lie and treat her so badly, Alex cut off all contact with Tucker.

Calling the wedding venue, she wasn’t surprised to hear he’d kept the money and never booked the date. Even the airline who Alex had paid for him to fly with had no records of his booking. Looking back now, she can’t believe she ever trusted him.

She says: “I was so in love at the time, I was almost blinded by his lie. When I think back, it seems so obvious. I don’t think I’ll ever trust anyone again. I wanted to share my story to warn other women that he is a pathological liar.”

As well as securing Alex an exclusive offer with Take A Break, the TTTP team have placed her amazing story with Reveal. Do you have a story to share about an ex-partner? If like Alex you’d like to name and shame a deceitful ex then get in touch!

You can read more examples from other people who have recently worked with TTTP to bring their story to the national press: Latest Stories.

You can also read more about the process of selling a story to the press on our Sell My Story page.