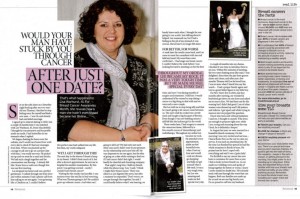 Lisa Warhurst, 41, from Wirral, had been single since June 2008 after going through a divorce. But what she didn’t expect was to find love – and discover she had breast cancer – in the same week.

But today, not only is Lisa clear of cancer, but she is married to the stranger she’d met online, who cared for her throughout her cancer ordeal. As soon as we heard her true cancer story, we knew a magazine would be interested. And we were right. The women’s magazines liked her true cancer story so much, Lisa is set to appear in three of them, earning a fee each time!

After her divorce, Lisa had struggled to juggle a social life while also caring for her two-year-old son, Thomas, and was single and lonely. In 2010 she decided she was ready to move on from her failed marriage and wanted to find someone to share her life. Although she was initially apprehensive of online dating, she signed up to eHarmony in January 2010.

In March that year she was matched with Lee Warhurst, 43, from Macclesfield. They began chatting and messaging about all sorts of things, light hearted to serious, likes and dislikes, past and future dreams, and went on their first date in August to Chester for a meal and drinks, and when Lee dropped Lisa home he asked to see her again soon. But the day after their first date disaster struck when Lisa found a lump in her breast, which turned out to be cancerous.

Lisa decided that, despite only meeting Lee once, she felt close enough to Lee to tell him everything, so she did, but when she was told she had breastcancer, she was terrified she’d never see Lee again. But Lee was supportive and said he wanted to continue seeing Lisa. Lee became Lisa’s rock, attending every hospital appointment and treatment session with her. He stood by her side throughout the whole ordeal, made her feel beautiful when Lisa got upset about her hair loss and would help with cooking dinner, going shopping and helping Lisa get around when she was feeling weak.

On New Year’s Eve 2010, just four months after meeting, Lee proposed to Lisa, and they married in August 2012.

Lisa says: ‘It was a very tough time, which I can honestly say was made easier because I had Lee at my side. He was just amazing, always complimenting me on the way I looked even with no hair, and he made me feel special every day. It is hard to believe that we are now coming up to our first anniversary. I feel so lucky.’

If you’ve got a true cancer story you’d like to share, or you’ve beaten cancer, email us on message@talktothepress.com or fill out the sell my story form to the right.

Talk to the Press
← Previous Story How selling your story can raise awareness: ‘Help me find the thugs that did this to me’
Next Story → Why we’re a reputable press agency for selling stories – download our customer charter