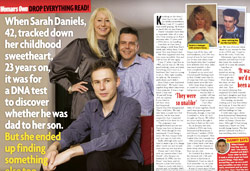 When Roy Cook answered his door to find his ex girlfriend on the doorstep, he had no idea what to expect. In fact, his ex, Sarah, wanted him to do a DNA test to discover if he was the father of her 23 year old son Danny.
The result was positive, and in an unexpected turn of events, the trio are now living together as a family and Roy and Sarah are engaged to be married.

We love a happy story at Talk to the Press, as do the national newspapers and magazines we work for, and not surprisingly, there was a lot of interest in Roy and Sarah’s story. Earlier this year, the couple appeared in the Daily Mail and Reveal magazine. This week, they are in Woman’s Own and they’ll soon be appearing in another magazine too. In all, they have earned thousands of pounds for their story, as well as having the experience of sharing it with so many different people.