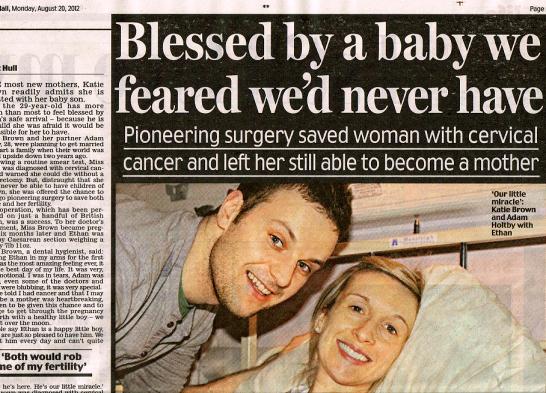 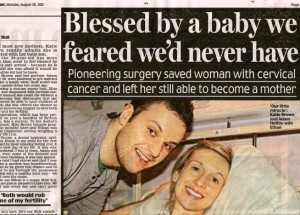 Like all new parents, Katie Brown and Adam Holtby savour every precious moment with their five month old son Ethan. But the couple have more reason than most to feel blessed – because Ethan is the baby the couple feared they might never have.

Katie’s inspirational story appears in today’s Daily Mail, where she tells of her fear she would never have children after the cancer was detected during a routine smear test in September 2010.

Katie says: ‘We’re thrilled that our story has appeared in the Daily Mail. When I was diagnosed with cervical cancer I thought I’d never have children, but this amazing surgery allowed me to have a baby. I just want other women to know that having a hysterectomy is not the only option if you have cancer. I look at Ethan every day and can’t quite believe he’s here. He’s our little miracle.’

Two years ago Katie’s world was turned upside down when she was diagnosed with cervical cancer at the age of just 27. In the past Katie would have had to undergo a radical hysterectomy to beat the cancer, but thanks to pioneering surgery doctors were able to save both her life and her fertility.

Although the cancer was in its early stages, doctors told Katie she may need a hysterectomy. But the couple were given fresh hope when they heard about a pioneering treatment which was an alternative to a hysterectomy.

The operation, called a radical abdominal trachelectomy, involves making a small incision in the abdomen and most of the cervix is then removed. A stitch is then placed in the opening of the cervix which is designed to hold a pregnancy. The rare procedure is thought to have been performed on a handful of women worldwide.

The operation in November 2010 was a success, although doctors warned Katie it could still be difficult for her to get pregnant and that she may need IVF.

But to her delight, just six months after having the operation, Katie fell pregnant. The couple’s son Ethan was born in February this year. Poignantly, he was delivered by the same surgeon who had performed the operation which saved Katie’s fertility.

If you’ve got an incredible story you’d like to share with the Daily Mail, email us on message@talktothepress.com or fill out the sell my story form just to the right.

Talk to the Press
← Previous Story Struck down by a horrific flesh eating bug – thanks to a paper cut
Next Story → Coverage for Michelle Scoffings’ meningitis picture diary in the Sun, the Daily Mail, the Mirror and the Express