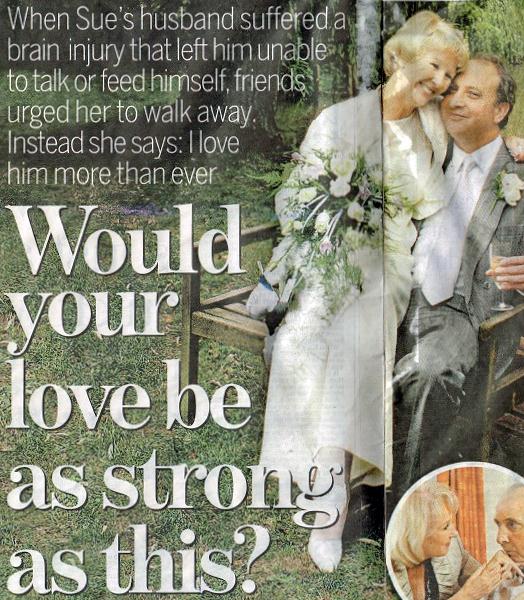 TTTP client shares her inspiring story with the Daily Mail 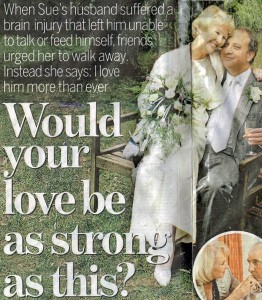 This week, TTTP client Sue Organ appears in the Daily Mail’s Femail section where she shares her inspirational story of caring for her husband Charles after he suffered a catastrophic brain injury in a bike accident.

Until five years ago Sue, 59, and Charles, 61, had the perfect life. Charles ran a successful fisheries company and the couple were planning to retire to the French countryside, where they had bought their dream farmhouse, which they were in the process of renovating.

But in June 2007 their dream was shattered when Charles was involved in an accident while taking part in the London to Brighton cycle ride. He came off his bike and hit his head on the pavement and a paramedic found him thrashing around at the roadside.

Charles was taken to hospital and at first doctors didn’t think his injuries were too severe. But just days before he was due to be discharged from hospital, he suffered a massive bleed on the brain – leaving him permanently brain damaged.

In that single moment the couple’s life changed forever. Five years on Charles requires round-the-clock care and is completely immobilised and unable to speak. He communicates through signing yes and no with his thumbs and only has the use of his right arm.

Sue has become her husband’s full time carer, but while many relationships would crumble after such a trauma, she says she has never once considered walking away. She says: ‘Charles may not be able to speak but he’s still the same person inside. I see myself as his voice and protector now. I love Charlie with every fibre and I will never walk away. The bond between us unbreakable.’

If you have an inspirational story of enduring love that you would like to share, email message@talktothepress.com or fill out the sell my story form to the right.