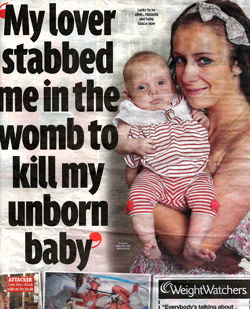 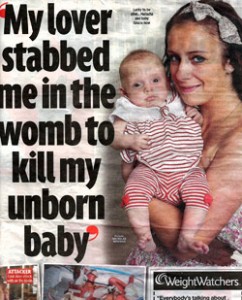 Natasha Cliff got in touch with us as she wanted help handling media attention during the upcoming trial of her ex-boyfriend for her attempted murder in a frenzied knife attack.

Natasha, 18, was six months pregnant when her boyfriend Cenk Ates, 23, stabbed her in the stomach with a kitchen knife in a violent and entirely unprovoked attack in January this year.

Incredibly, the knife missed Natasha’s unborn baby by inches and both she and her daughter survived the horrific attack. Baby Gracie was born three months prematurely by emergency caesarean that same day, weighing just 2lbs. She had to be resuscitated at birth and spent weeks in intensive care.

Natasha says, prior to the attack, Ates was a loving and attentive boyfriend. Although he wasn’t the father of her child he had promised to bring her up as his own and the couple had talked about marriage.

However he just ‘flipped’ one afternoon while they were watching TV and lunged at Natasha. She later found out that he had been battling a serious alcohol problem for months, which he used in his defence.

However, the jury found him guilty of Natasha’s attempted murder and he was convicted at St Albans Crown Court last month. He will be sentenced later this month.

Six months after the attack, Natasha finally felt ready to talk about what happened and we secured her an exclusive deal with The Sunday Mirror, where she spoke about her and her daughter’s miraculous recovery.

Several women’s magazines were also moved by Natasha’s amazing story and we are currently in the process of securing her both magazine and TV deals.

Natasha says: ‘I feel really lucky to be alive as the doctors said both of us could have died. But I’ve come out of this stronger than ever. I’ve got Gracie in my life now and that’s all that matters.’

Talk to the Press
← Previous Story The Sun – ‘My little boy is having a sex change.’
Next Story → Daily Mirror – ‘My disastrous gastric band’