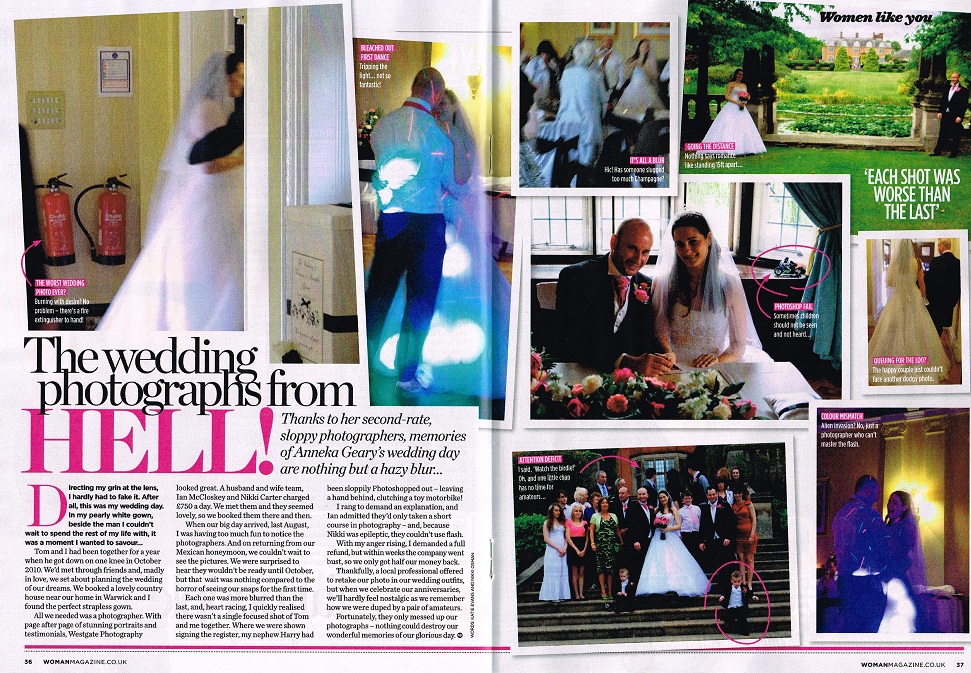 This week TTTP clients Anneka and Tom Geary appear in Woman magazine, where they tell how their wedding day was ruined by bungling photographers who created an album of disastrous snaps of their big day.

In April we secured Tom and Anneka national press coverage for their story after they emailed us a selection of the dreadful photos, which included blurry shots and pictures where not a single guest was looking at the camera.

The couple’s story appeared in several newspapers, with the headlines asking ‘Are these Britain’s worst wedding photographers?’ Unfortunately for the couple, the answer was a resounding yes!

Tom and Anneka’s nightmare started after they hired a husband and wife team, paying them £750 to shoot their wedding photos. On the day they were too caught up in the moment to notice whether they were doing a good job, but when they got back from their honeymoon they were in for a shock.

Most of the photos were blurry or out of focus, and there were very few shots of the happy couple together. In one picture, where they were signing the register, Anneka’s nephew had been sloppily Photoshopped out, leaving a ghostly hand behind clutching a toy motorbike. Another blurry shot simply showed the back of Anneka’s dress and a pair of fire extinguishers!

Needless to say, the couple were devastated and immediately demanded a refund. The photographers then admitted they had only taken a short course in photography and had little experience. But Tom and Anneka only got half their money back as, unsurprisingly, the company subsequently went bust.

But the couple’s story does have a happy ending. After the story was picked up by national papers, Tom and Anneka were contacted by a local firm, Jems Photography, who offered to re-shoot their big day in their wedding outfits, along with their close family and friends. The shoot took place this month and the couple are thrilled with the results.

Anneka says: ‘I’m so pleased we now have some beautiful photos we can cherish forever. Hopefully one day we can laugh about what happened. A dodgy pair of photographers may have messed up our photos, but no one can take away our wonderful memories of our special day.’