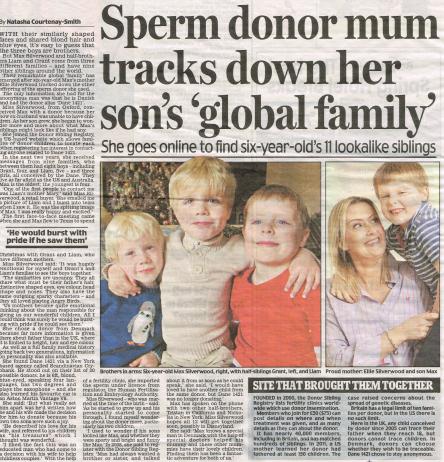 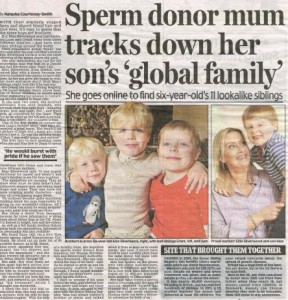 As soon as we heard Ellie Silverwood’s story, we knew a newspaper would love to run it. And this weekend, it appeared in the Daily Mail.

Ellie has tracked down 12 half siblings to her son Max, who was conceive via donor sperm six years ago, and has just returned from a trip to America, where she and Max met two of his half siblings, Grant and Liam and spoke to two more half-brothers on the phone.

Ellie says the likeness between the children is ‘uncanny’ and that the man responsible for fathering them would be bursting with pride if he could see them.

Ellie embarked on her incredible journey to discover if her son had any half siblings following her divorce. Via the US based website, the Donor Sibling Registry, she traced an astounding 12 half siblings from around the world.

She has been astounded to discover they all share the same blonde hair, blued eyed good looks – her own son has just been signed by a children’s modelling agency.

In December, Ellie flew Texas for a Boxing Day meeting with two of her sons half-brothers. She met Grant, 4 and Liam 5, along with their parents and grandparents. She says the union was emotional for all of them and the boys bonded instantly.

Now back in the UK, Ellie says her son talks about his brothers regularly and they are both delighted with the way things have turned out.

She said: ‘Max knows a special man in Denmark with the help of special doctors helped his mummy and these other mummies have their lovely children. Finding them has been a fantastic adventure for both of us.’

If you’ve got an incredible story you’d like to share with the Daily Mail, or any other national newspaper, email us on message@talktothepress.com or fill out the sell my story form on the right.