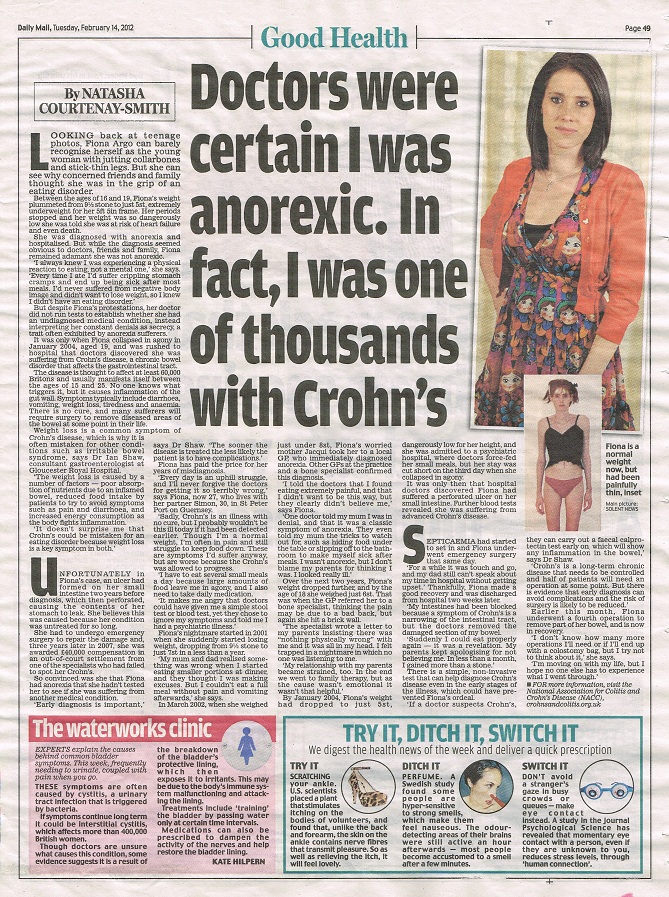 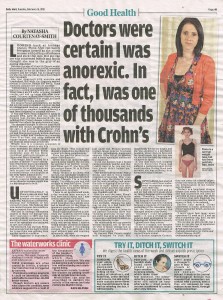 Fiona Argo got in touch with us as she wanted to raise awareness of Crohn’s disease, a condition she has suffered with since she was a teenager. Although Fiona, now 27, first started displaying symptoms at the age of 16, unfortunately her illness was not diagnosed for another three years as doctors believed she was suffering from anorexia after she lost a lot of weight in a short space of time, which is a classic symptoms of Crohn’s.

We placed Fiona’s story in the health section of the Daily Mail, where this week she tells of her horror as doctors continued to insist she had an eating disorder. In fact, Fiona was suffering crippling stomach cramps every time she ate anything and was unable to keep her food down, regularly being sick after meals. Her mum took her to the doctor, who immediately diagnosed her with anorexia and failed to perform any tests for a medical condition.

Fiona says: ‘I’m thrilled with the article in the Daily Mail and if this story stops at least one person being branded an anorexic and actually getting treated for a serious condition then my job is done.’

By 2004 Fiona’s weight had plummeted from nine stone to a skeletal five stone that she was admitted to a psychiatric unit. It was only when she collapsed in agony one day and was rushed to hospital that doctors discovered she had Crohn’s disease, which affects at least 60,000 people in the UK and for which there is no cure. Sadly the condition had gone undiagnosed for so long that Fiona had developed a large ulcer on her intestine, which then perforated, leaving her in agony and at risk of death from septicaemia.

Fiona underwent emergency surgery that day and thankfully made a recovery. In 2007 she received £40,000 in compensation after suing one of the doctors responsible for her misdiagnosis. Fiona still suffers with the symptoms of Crohn’s every day, including stomach cramps and vomiting, but thanks to medication and a careful diet her weight is now stable at eight stone. However she may need several more operations during her life.

If you have an amazing real life story contact us at message@talktothepress.com

Talk to the Press
← Previous Story About that ‘Micropig’ you sold me…..
Next Story → ‘We’re all happy with our story’ say TTTP clients who appeared in Sunday Mirror at weekend