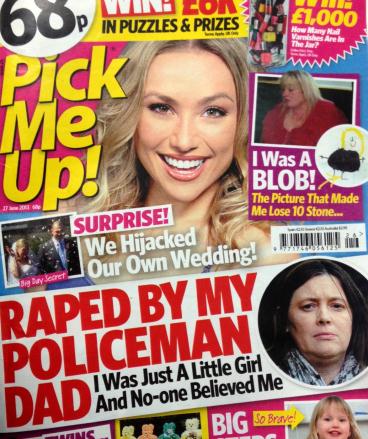 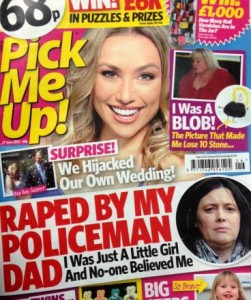 This week, one of our client’s harrowing stories appears on the front cover of Pick Me Up magazine. Tina Petal says: ‘Thanks so much for helping me get my story out there, its incredible to finally be heard, and the story is brilliantly told.‘

Growing up, Tina, was always envious of girls whose fathers loved and protected them. Despite Tina’s father, Joseph Sample, now 62, being a respected policeman in her local area – he was nothing short of a monster behind closed doors.

From the age of eight, Joseph subjected his daughter to degrading sex acts before he started raping her at 15. For years, Tina tried to raise the alarm of her father’s abuse – but each time police or social services ignored her.

In 2008, almost two decades after his terrible sex crimes, his other victim, who cannot be named, came forward and her story tallied with Tina’s. Because of this, sick Sample pleaded guilty to a catalogue of vile sex crimes dating back 20 years ago and was sentenced to 10 years in prison at Teeside Crown Court in January 2009.

Sobbing was heard in the public gallery as the graphic details of the frightening and manipulative sex beast’s crimes were outlined. Today, brave Tina has chosen to waive her right to anonymity in a bid to help other victims come forward.

To the outside world, Tina’s father was a normal, decent man and would introduce her to his work colleagues as his ‘beautiful daughter’. Tina tried to get help numerous times when she was a teen – even telling her teachers who turned up at her house and confronted her mother. She says Cleveland police and social services ignored her claims and she attempted to take her life several times.

‘I’ll never forgive him for what he did to me,’ says Tina, 46, who’s currently unemployed and living in County Durham. ‘Not only did he steal my childhood but he blighted my adult life too. I’ve finally found the courage to come forward and hope my story will help other victims do the same.’

We’ve also put Tina in touch with an expert legal firm who are now helping her take action against the authorities that failed to protect her.