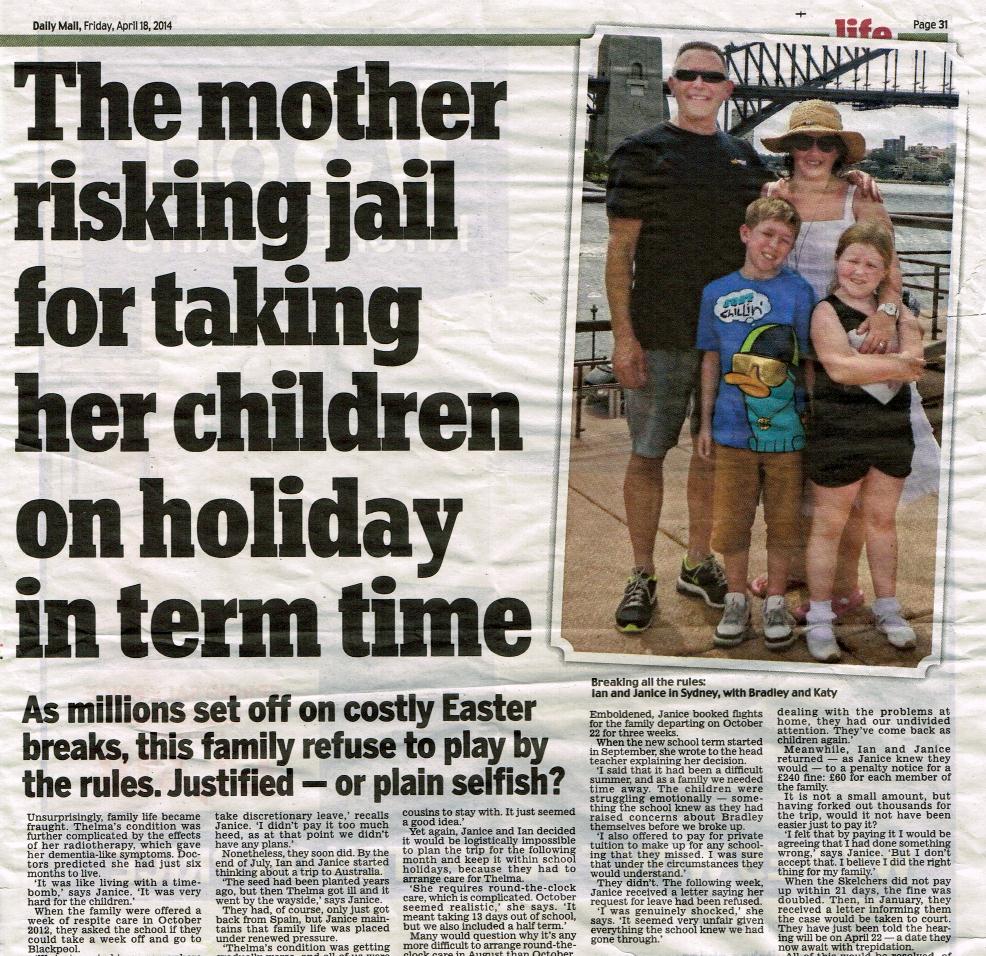 When Janice Skelter took her children on holiday during term time, she knew her school didn’t approve. But her and her husband are now facing a three month prison sentence and a fine up to £2,000 each after their two children, Bradley, 10 and Katy, seven, missed 13 days of education in October 2013.

Under new laws, they were fined £240 on return which doubled to £480 after Janice and Ian refused to pay it within 21 days. They’ve now been summoned to court and the date is yet to be confirmed but Janice remains unrepentant about her actions and says her circumstances are ‘exceptional’.

What’s more, she believes travelling is vital to a child’s development and has enriched her children.

With debate raging about taking children on school during term time, Janice was keen to share her experiences in public.

Before the new law came into action, Janice’s kids missed 21 days of school over a period of two academic years but the headteacher had authorised the time off.

She believes that missing a few weeks of school does not have a ‘detrimental’ effect on her children’s education and says that as a child she never travelled and believed geography was a useless subject – but her kids don’t as they’ve seen the world. She says all of her leave in the past was authorised bar the trip to Australia.

‘It’s a disgrace,’ says Janice, 39, a full time carer, who lives with her disabled mother-in-law, husband, Ian, 49, a window fitter, and two kids in Coventry. ‘The school is aware that we work round the clock to look after my very sick mother who has had brain disease for two years and we needed some respite.

‘I understand education is important and I always make sure my kids are on time and are neatly turned out for school. But I also know when my children need a break and because I am a full time carer to my mother in law, we have to work around her needs and can’t swan off on holiday when we want to. To be punished for taking a 10 day break is a disgrace.’

Janice now faces a three month prison sentence and a fine up to £4,000 each. Janice’s interview drew huge support from the Daily Mail readers, the newspaper in which it appeared, and her thoughts certainly added to the ongoing debate in this area.

If you’ve got an issue you’d like to debate in public, email us on message@talktothepress.com or fill out the sell my story form on the right.