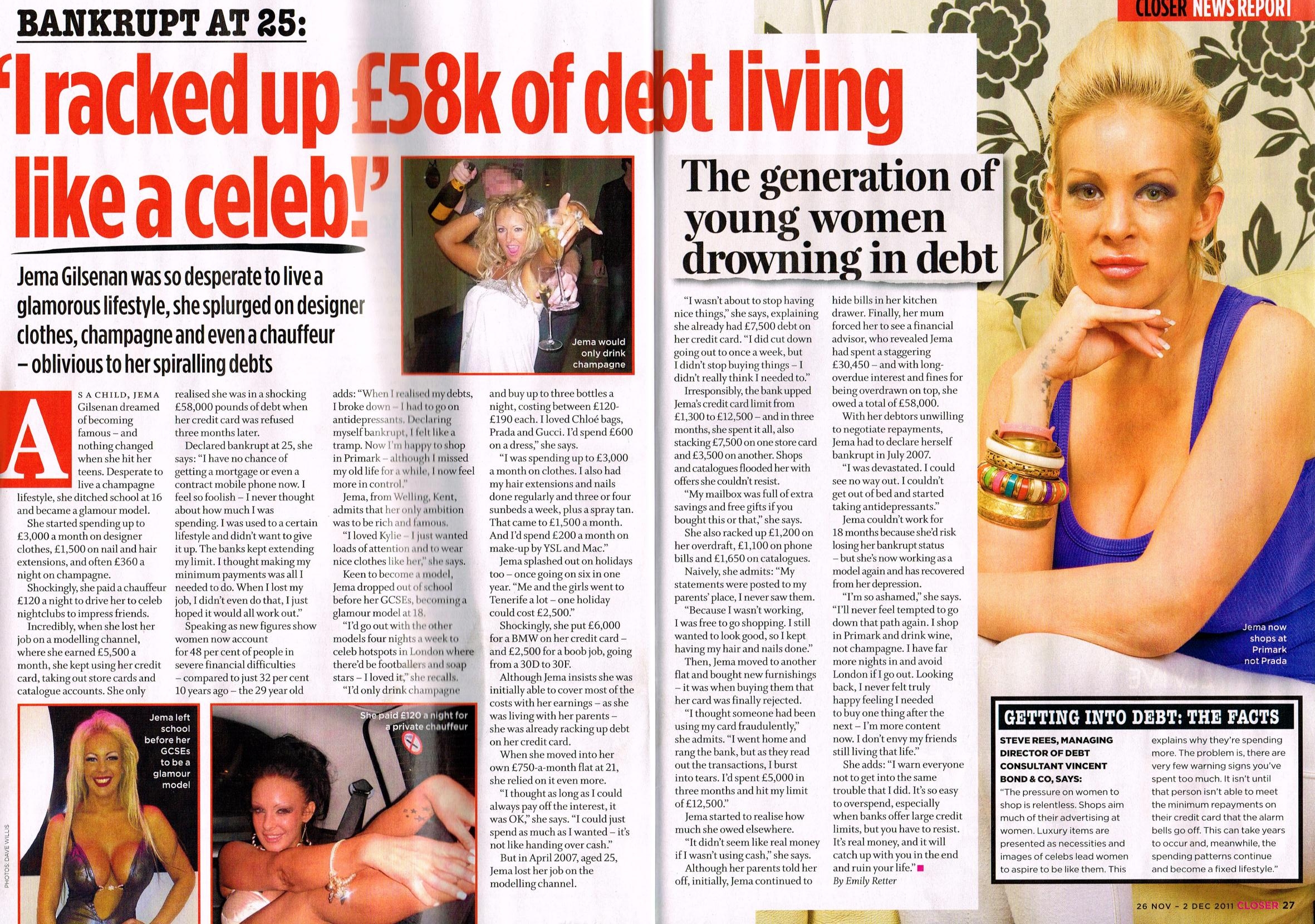 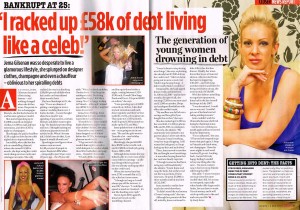 This week TTTP client Jema Gilsenan appears in Closer magazine where she talks about how living a celebrity lifestyle saw her spiral into £58,000 of debt and forced her into bankruptcy at just 25.

Jema, now 29, could command £4,000 a month through modelling work but with four store cars, two catalogue accounts and credit cards, her outgoings soon started to outweigh her incomings.

She splurged on designer clothes, 50 inch plasma televisions, holidayed six times a year and enjoyed nights out to London’s celebrity hotspots. She even hired her own driver to chauffeur her wherever she wanted.

Losing her job in April 2007 didn’t put an end to her lavish lifestyle and she continued as before. With a credit limit of £12,500, Jema thought nothing of buying the latest Chloe handbag and loved Prada and Versace. She paid for a boob job and bought a £6,000 BMW on her credit card and continued to buy expensive jewellery until one day while in the middle of decorating her new flat her card was declined in a shop. Furious and concerned she had been a victim of fraud; Jema rushed to her parent’s house and called the bank. She listened as they reeled off the list of payments she had made and burst into tears when she realised she had spent almost £5,000 in a matter of days.

Unemployed, Jema borrowed £6,000 from her parents to pay her rent and cleared out her ISA and savings account of £9,000. Nonetheless, red letters and bills started to pile up and she would dread the arrival of the postman. Too scared to open any of them, Jema stored them all in a kitchen drawer until one day her mum found them. All-in-all Jema owed £34,000 but with interest it added up to £58,000. She filed for bankruptcy in July 2007.

Deciding to get life back on track, Jema found new work and is now earning a comfortable wage again. Despite this, she refuses to be as frivolous as she once was and now prefers to shop in high street stores like Primark. She is keen to get on the property ladder but knows with her credit rating that might never be a possibility.

She says: ‘I’ve learnt the hard way but at least I’ve come out the other side.’

Talk to the Press
← Previous Story Looking for a book deal for your true life story?
Next Story → The incredible story of the woman whose face was rebuilt after being shattered in 20 places