Victim of a crime? Share your story and get maximum coverage and payment 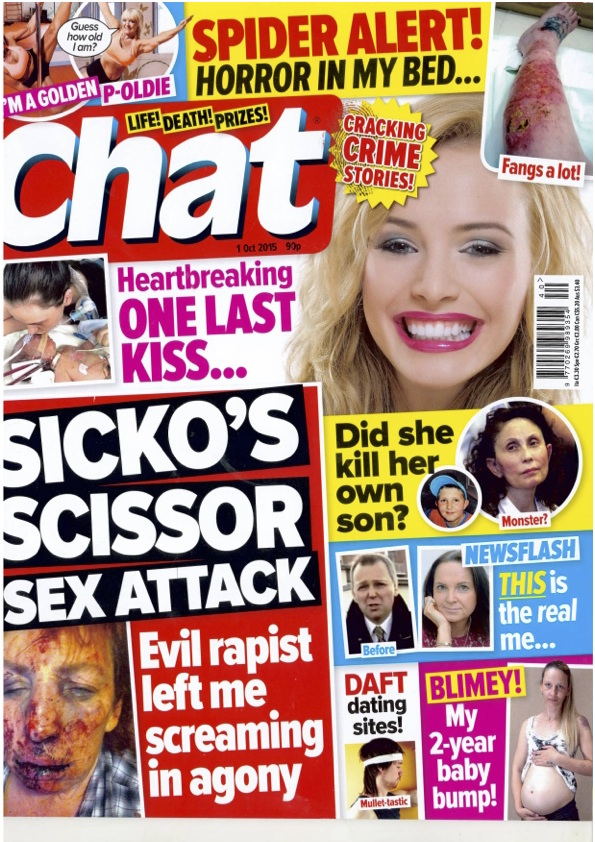 TTTP CLIENT WHO JAILED HER ‘MOSTER BOYFRIEND’ IS COVER STORY OF THIS WEEK’S CHAT MAGAZINE – ARE YOU A VICTIM OF A CRIME AND WANT TO SHARE YOUR STORY?

These disturbing pictures show the horrifying aftermath of a bloody attack that Sonia Saxby, 49, a former barwoman, from Trowbridge, Wiltshire, was subjected to by her psycho boyfriend.

On 8th November 2015, deranged David Hateley, 56, locked his girlfriend in his flat and beat her face, neck and body before raping her with a pair of scissors – all because he suspected she had been cheating on him.

Incredibly, she managed to escape and ran covered in blood into a neighbour’s house begging for help.

Twisted Hateley was arrested that night and finally on 8th July 2015, he was jailed for 10 years at Salisbury Crown Court after pleading guilty to ABH and sexual assault with penetration.

Since the traumatic attack, Sonia has been diagnosed with PTSD and suffers from terrifying flashbacks.

The mum-of-two was left with severe injuries and cuts to her face, body and vagina and was left for dead. She said: “That monster turned my life upside down. To think someone you loved and trusted could hurt you in such a vile way is heartbreaking.

Sonia told us: “I will never forgive what he did to me, he has changed me forever and I can’t get through a day without having disturbing flashbacks.

“I am on medication for PTSD because of the hell he put me through. But despite this, I won’t let that sicko win.

“I’m going to beat this and do everything I can to live my life. But I don’t think I’ll ever trust another man again.”

Where did we place Sonia’s story?

We got the magazines to bid for Sonia’s story to take her money up. In the end it went to Chat magazine where it appeared as the cover story. We are now in the process of securing her a second rights magazine deal as well as a daytime TV show.

Why is it important NOT to speak to your local paper BEFORE you do national press?

Unfortunately, Sonia spoke to her local paper before she contacted us. As she had already given them an interview and her pics we were powerless to stop the story going out. Most local papers syndicate stories (meaning they’re sent out nationally and the local paper receive payment for them NOT YOU).

In Sonia’s case, it ruined her chances of getting an exclusive paper deal because her local paper syndicated it and didn’t pay her for the story. We are not saying you can never do your local paper, but don’t do it until AFTER you’ve done all your national press else you will lose out money-wise.

What Sonia and her family said about TTTP

Sonia’s daughter Anna said: “The piece is fantastic it’s been worded so well and shows him for the monster he was. Thank you so much for your help.”

How long did it take us to pay Sonia?

Generally, it takes 6-8 weeks for a publication to pay but we paid Sonia THREE days after it went to press.

We don’t believe you should wait for your money, so will always speed it through for you if we can.

Sell your story to the national press 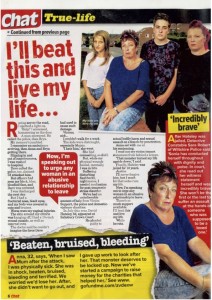 If you would like to share your story, simply complete the story valuation form on this page. There is no obligation and we only need the main points of your story to make a valuation.

For example, Sonia could have written ‘Boyfriend recently jailed for 10 years for attacking me’. Even with that level of information, we’d be able to provide you with a good estimate of what you should expect for your story.

Your information is safe with us and we won’t use anything without your permission.

To read more about how to sell a story to the press, read our Sell My Story page.

You can see more of our recent clients together with latest news from Talk to the Press below: