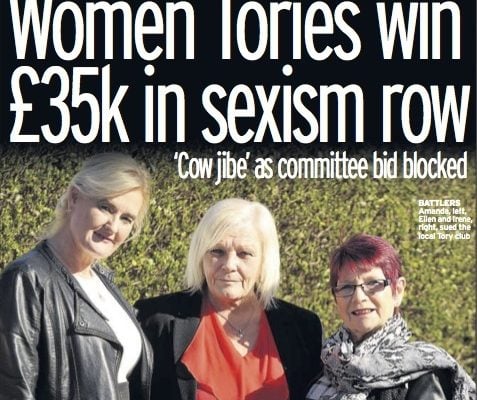 Have you been a victim of discrimination? Have you won a sexism case or a different discrimination case and would like to share your story with the world?

When Irene James contacted us about her the sex discrimination she’d suffered at her local Tory social club, we knew a number of papers would be interested in speaking to her.

Irene, and two other female members, were awarded damages in a landmark legal challenge against the Conservative club for being the victim of discrimination. They say one committee man told a fellow male member that women would never serve on the committee “as long as he had a hole in his a**e”.

Irene James, 67, also says she was told: “You’re as welcome at this club as a turd at a wedding.” 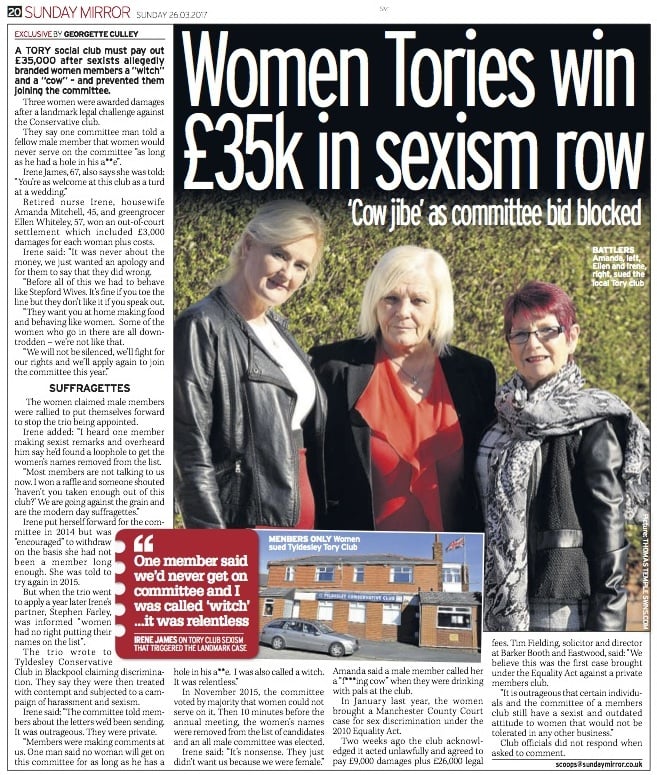 Irene said: “It was never about the money, we just wanted an apology and for them to say that they did wrong.

“Before all of this we had to behave like Stepford Wives. It’s fine if you toe the line but they don’t like it if you speak out.

“They want you at home making food and behaving like women. Some of the women who go in there are all downtrodden – we’re not like that.

“We will not be silenced, we’ll fight for our rights and we’ll apply again to join the committee this year.”

The women claimed male members were rallied to put themselves forward to stop the trio being appointed.

Irene added: “I heard one member making sexist remarks and overheard him say he’d found a loophole to get the women’s names removed from the list.

“Most members are not talking to us now. I won a raffle and someone shouted ‘haven’t you taken enough out of this club?’ We are going against the grain and are the modern day suffragettes.”

Where did we place Irene’s story?

We placed Irene’s story exclusively with The Sunday Mirror where it appeared as a page lead. After, we syndicated it on our news wires and it appeared in a number of other online websites to try and generate as much publicity as possible. For Irene, it wasn’t about the money we secured for her, she wanted to name and shame the club and make a stand for other women who may be going through something similar. We loved working with Irene and think she’s a real inspiration!

Have you been a victim of discrimination, sexual or otherwise?

If you’ve suffered discrimination at work or at a social club then we’d like to hear from you. For legal reasons, the court case would need to have gone in your favour or the company would need to have admitted liability in writing.

If you’d like to find out more and just get some free advice please call 0207 549 5406 or fill out the story valuation form on this page. There is no obligation and our service wont cost you a penny.

One of our friendly team will get back to you within 24 hours to find out more and let you know if it’s a story we can help with. We look forward to hearing from you.

To find out more about how we guarantee you the highest fees possible for your story, read our Sell My Story – How it Works page.

Georgette Culley
← Previous Story How to sell information to the press
Next Story → Body transformation? Sell your before and after photos