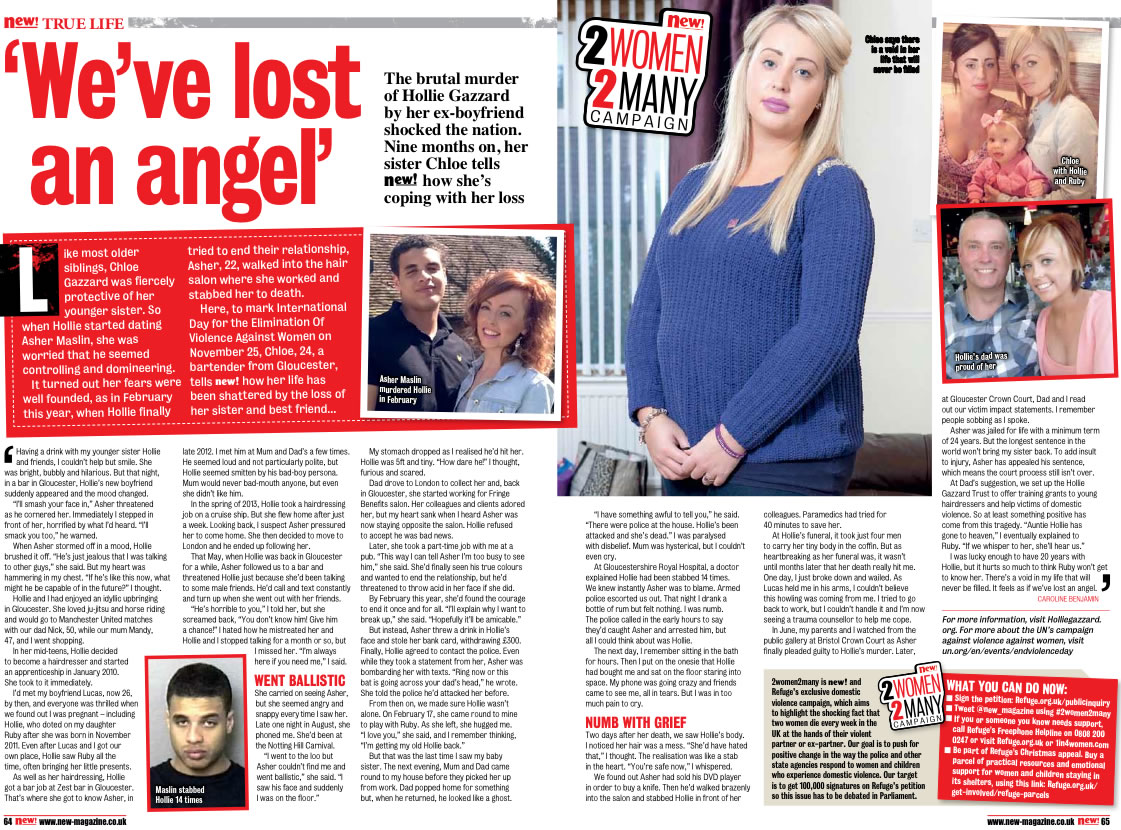 Victims of Crime Speak Out through the Media

TTTP work alongside a number of charities and support groups – giving victims of crime a voice and helping them share their stories.

In July 2014, Victim Support contacted us for our help. They had been supporting Hollie Gazzard’s family through the difficult court case and wanted us to arrange all of their media attention for them.

You may have seen in our previous post that we arranged for Hollie’s family to go on This Morning’s sofa to share their heartbreaking story. Hollie was brutally murdered in broad daylight by her ex-boyfriend, Asher Maslin, 22, in February 2013 – whilst she was at work at a hairdressers.

In a story that shocked the nation, CCTV captured Maslin trading in a DVD player to get cash to buy a 12 inch kitchen knife before heading over to Hollie’s place of work and stabbing her to death. Last week he was sentenced to life imprisonment at Gloucester Crown Court.

Despite losing their beloved daughter in the most tragic of circumstances, the Gazzards are now campaigning to raise awareness for other domestic violence victims. They’ve since set up their own charity, the Hollie Gazzard Trust.

We are all wearing the charity’s pink and purple wristbands to show our support. We continue to work with the Gazzards and Victim Support to help the family continue to raise awareness through the media. You can visit the Hollie Gazzard Trust here.

This Morning has enormous reach, so if you are sharing an important story that can help or inspire others, or raise the profile of a charity or cause, it’s really worth doing.

For some, the idea of appearing on television can feel like a daunting experience. But we can assure you that all our clients enjoy the day and tell us it’s their favourite part of talking to the press. The staff and hosts of This Morning go out of their way to make the experience easy, stress-free and memorable – even when they’re discussing traumatic events. The studio is also much smaller and cosier than you’d imagine from watching the show on television, so everyone feels at home and comfortable.

Plus, there are usually a few celebrities milling around in the green room, which is always exciting! We’ve met Keith Lemon, Rylan, Ollie Murs and a number of soap stars to name a few! Everyone who goes on the show comes down to London the day before, stays in a hotel and get their hair and make up professionally done too! It really is a great experience.

After the Gazzards appeared on TM, we placed their story with Take a Break magazine – which has over 1 million readers in the UK. This week, their story appeared in New! Magazine.

If you have a story to share with the media, and would like to be on This Morning, email us on message@talktothepress.com or fill out our ‘Sell My Story’ form to the right. You can also read our tips and advice about how to sell a story to a magazine or newspaper here: Tips & Advice, and you can see recent stories where we’ve helped raise awareness for all sorts of causes: https://www.talktothepress.co.uk/raise-awareness-2