If you want to sell a front page story, we often work alongside extraordinary families who wish to share their heart-warming stories. 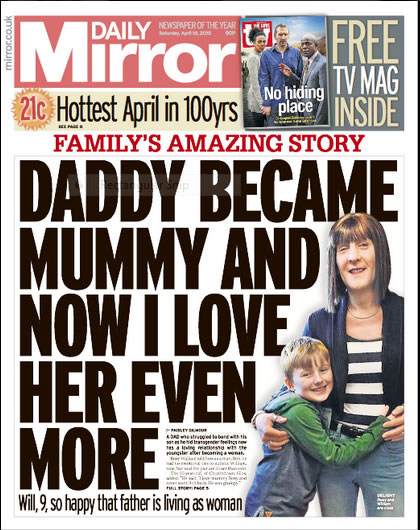 When Roxy Wallace contacted us with her extraordinary story we knew a paper would love to hear it.

Incredibly, 50-year-old Roxy used to be a burly bodyguard named ‘Bob’. Unhappy in himself, Bob suffered from such severe depression he never played with his son William, now nine. But one day cross-dressing Bob finally opened up to wife of 20 years Jo, and said he wanted to live as a woman called Roxy.

Ever since, Roxy, now a stay-at-home mum, has had a better relationship with William, who is on the autistic spectrum, because living as a woman has helped her beat her battle with depression. William said: “I love my second mummy so much. I never want my daddy back.”

Today, their mother-to-son relationship is ‘so strong’ that Williams says he ‘never wants his dad back.’ What’s more, call centre worker Jo has stuck by the person she married, in 1995, and now the pair are in a loving lesbian relationship, and still live in their marital home in Churchdown, Glos.

Roxy said: “My biggest fear was pushing my family away – but my depression was so bad that’s what I was doing anyway. I just didn’t realise at the time.

“My family have been so supportive of me, and it’s helped me grow and improve as a person. I now feel like the luckiest woman in the world. Not only has my amazing wife stood by me, but my son and I are closer than ever.

“When I was Bob, William was so closed off but now he calls me ‘mummy Roxy’ and is so much more affectionate and cuddly. I feel so blessed to have such a fantastic family.” 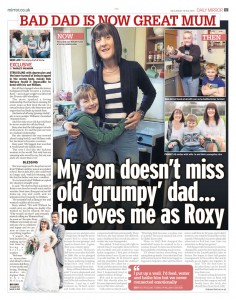 How can Talk to the Press get you the best coverage for your story?

After speaking to Roxy, we placed her story exclusively with The Daily Mirror and last Saturday it went front page.

After appearing in The Mirror we syndicated it on the news wires – so a number of national publications online and in print could run it afterwards.

We’re now in the process of securing Roxy two magazine deals. We’ve also received a lot of interest from television programmes and networks.

Do you have a story to sell?

We will get back to you as soon as we can. Please do not contact any other agencies, journalists or publications directly else it could compromise any deal we arrange for you.

To read more information about how much your story is worth, see our story valuation page: How much is my story worth?

You can also see some of our recent stories and posts here:

Georgette Culley
← Previous Story How do I sell my kiss n’ tell story?
Next Story → Victim of a crime? Share your story and get maximum coverage and payment