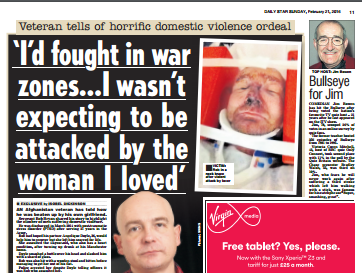 eople think of domestic violence as a cowardly bully husband or boyfriend controlling and abusing his wife or girlfiend, but Brave Rob Bryan has spoken out about being a male domestic violence victim. Rob was hospitalised after his girlfriend beat him to a pulp in an unprovoked attack.

If you have a similar (or unrelated) story to share with the press, please let us know by completing the story valuation form on this page. We guarantee to tell your story YOUR way, secure you the maximum fees, and our service is free.

The 43-year-old war veteran waived his right to anonymity to speak candidly about the stigma attached to male domestic violence victims.

Rob – who’s served on the frontline in Afghanistan, Bosnia and Northern Ireland – was left in a
pool of blood when his long-term girlfriend Angelique Doyle, 36, who’s unemployed, attacked him at his home in September.

The dad – who was discharged from the army after 21 years of service due to PTSD in March 2014 – struck up a relationship with unemployed Angelique two months after he returned to the UK.

But in September Doyle launched a drunken attack on dad Rob – who has an 11-year-old son from a previous relationship – at his flat in Ashton-under-Lyne, Manchester.

During the violent onslaught, unemployed Doyle smashed a glass and a wine bottle over Rob’s head, hit him with a wooden stool and a guitar and bit and slashed his skin with glass. 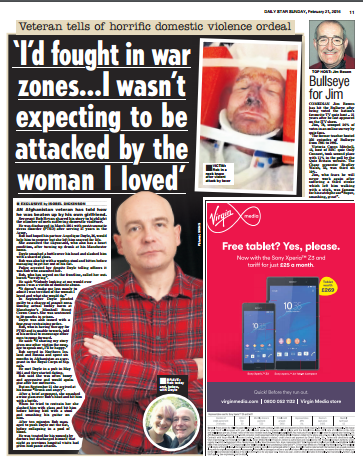 She also whacked him in the face with a 12kg dumbbell, breaking his nose.

Rob said: “It was terrifying. She was battering me and shouting vile abuse while I lay there in a pool of my own blood.

“I’d battled in war zones on the front line, I didn’t expect to be attacked by the person who was supposed to love me.

“Men aren’t supposed to hit women so I didn’t hit back, I was just trying to get her off me.”

In an act of unimaginable betrayal, after Doyle attacked him she called the police and claimed Rob had assaulted her – but her lies fell flat and police later arrested her that night.

In September Angelique Doyle pleaded guilty to a charge of assault occasioning actual bodily harm at Minshull Street Crown Court, Manchester, and was sentenced to 20 months in prison.

She was also issued with a four-year restraining order against Rob.

Now, Rob – who is still having therapy for PTSD and is unable to work – says he wants to share his story to encourage other male victims of domestic violence to report it.

He adds: “Too often men in violent
relationships are scared to speak up – but unless they do, the abuse will
continue.

“It doesn’t make me less manly to admit I was terrified of the woman I loved and what she’d do.”

Are you a victim of domestic violence?

Whether you’re male or female we would like to hear from you if you’re a victim of domestic violence. In order to raise awareness through the media, the perpetrator must have been prosecuted and convicted for the crime.

If you’re in the middle of the court case, that’s fine. We can’t speak to you until after the court case for legal reasons but please give us a ring after and we’ll guide you through the process of selling your story.

Where did Rob’s story make?

We placed Rob’s story exclusively with The Daily Star on Sunday and we’ve secured him a magazine deal with one of the biggest women’s magazines. A number of daytime TV shows have got in touch and are also interested in getting Rob on the sofa. To read more about the story selling process, see our Sell My Story page.

Some of Talk to the Press’ recent clients…