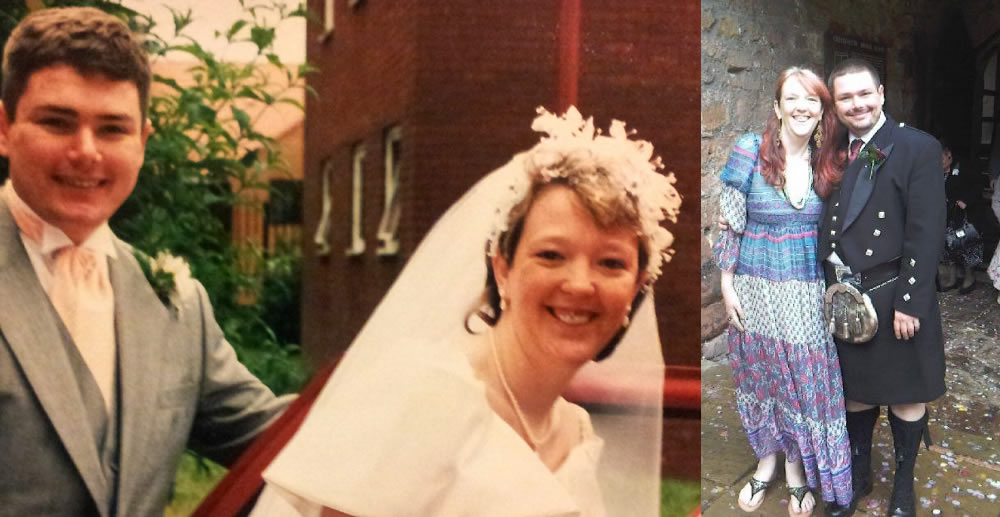 Whirlwind romances can last, we are the living proof!

Last week Cameron Diaz married her boyfriend of eight months, Benji Madden, and six months before Cheryl Cole married Jean-Bernard Fernandez-Versini after a whirlwind romance. So when Tina Challenor told us she’s celebrating her 20th anniversary with hubby David after randomly meeting back in 1993, we knew a newspaper would be interested in hearing her story that whirlwind romances can last.

The pair, both 23 at the time, met over a CB radio when they were messing around with friends. What originally started as a bit of fun, Tina had no idea that this man she’d stumble across would stand the test of time. The pair chatted for half an hour before Tina suggested meeting.

She said: “I was so uninterested in men after a string of bad relationships, but there was something about his voice – he made me laugh. I asked if he wanted to grab a cup of tea and 30 minutes later we met at a local café.” When she saw him in the flesh, she turned to her friend and mused: ‘Hands off, I’m going to marry him!’

The pair chatted away and 36 hours later, David came back to Tina’s and never left. They were inseparable, waking up with each other every day and falling even more in love. True to their pattern – four weeks later David proposed.

She said: “I screamed and said yes instantly. I didn’t need to have a second thought. I didn’t even consider how long we’d been together all I knew is that I wanted to marry him. I had been in past relationships that moved slow and didn’t work. They had followed the stuffy set ‘relationship norm’ and went wrong in every possible way. This was right – and we knew it.”

But not everyone shared the same enthusiasm, David’s parents didn’t agree and wrote to Tina the day before the wedding telling them to call it off. But the pair stuck to their guns, knowing their love for each other was strong enough to stand the test of time.

In June 1995, 24 months after meeting, the couple got married in an intimate service in Coventry. Three children and a life time of memories later, the pair are about to celebrate their 20th ‘China’ anniversary.

Tina said: “People constantly doubt quick romances and spur of the moment engagements, but believe me when you know it’s right, you know. I am as much in love today as I was when I first met David. He cooks, cleans and makes me laugh – we will never leave each other’s side.”

“Every year we go to a local café and have a cup of tea. This year we are going to Coomb Abbey in Coventry as it’s a place we’ve always wanted to go. We are proof that whirlwind romances do work – you should never judge it until you know it.”

“People shouldn’t be so quick to dismiss fast-paced romances. Sometimes you just know and I am sure that if that’s how Cameron and Cheryl felt, then they have a very long future with their husbands.”

You can also read more about selling a relationship story to the press here.