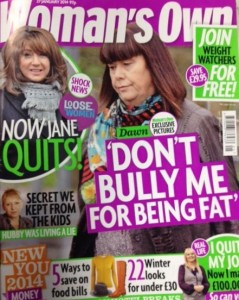 When Sian Hart’s father told her he was a transvestite she thought he was joking. At 15, she knew exactly what it meant but didn’t believe her football-mad-beer-drinking father could ever want to be a woman. But to her horror he was telling the truth. Unbeknown to Sian and her twin sister, Ellen, both 21, their father, Iain, 57, had been secretly living as a woman, Tricia, behind their backs for several years.

Incredibly, their mother, Louise hart, now 49, an IT contractor, knew all about his secret life and took him shopping for women’s clothes and covered for him when he went to Manchester at the weekend to hit up the gay village dressed as a woman. Naturally, it took the sisters a few years to get their heads round, but now they say they love having ‘two mums’.

They even threw their dad a ‘goodbye Iain party’ when he made the decision to live as Tricia full time. This week, the Hart family appear in Woman’s Own magazine telling their incredible story, and they’ll soon be appearing in another magazine too.

Soon, Tricia will start taking hormones and is considering gender realignment surgery. Although he is no longer with their mother, the family continue to live happily under the same roof together.

‘We’re not the average family but it actually works for us,’ says Sian, from Chesterfield. ‘Tricia tries to give us fashion and make-up tips but I rarely take them on board. She dresses very sophisticated but we do wind her up that she needs to straighten her wig!’

For years the girls grew up thinking their father was ‘straight’ and just a normal guy. Although he’s quite a shy, skinny guy loved beer, football and showed no signs of being gay or wanting to live as a woman. He worked hard at his job in IT and provided for his family – and the twins’ older sister, Emily, who’s from a previous relationship.

At 13, the girls found out their parents had separated but had no idea why. However, their father, Iain, continued to live with them. Unbeknown to them, their mother had known all about his cross dressing since the girls were six and had even supported him. Louise made a list of rules he had to abide to – he wasn’t allowed to cross dress in front of the girls, and wasn’t allowed to turn up to the pub still wearing nail varnish.

But Iain decided to call an end to their relationship but live together. At 15, the girls came back from school and Iain asked them if they knew what a transvestite was. Louise was furious because she didn’t want the girls to find out until they were 18 and didn’t want it to distract them when they were doing their GCSEs.

When they replied they did, he told them he was one. Initially, the girls burst out laughing and thought he was joking but when they realised he wasn’t they were devastated. He’d been going to Manchester a lot at the weekends and it emerged he’d been going so he could dress up at Tricia and hit up the gay scene. Initially the girls couldn’t accept it and wouldn’t let him ‘come out’ as Tricia.

Iain continued to live secretly as Tricia until the girls were ready. A few years later, the girls decided their father’s happiness was more important than what people thought. The first time they met Tricia they couldn’t believe it. They said she was wearing a knee length skirt, shirt and sandals and looked ‘classier’ than they’d imagined. But she was wearing thick foundation to hide her stubble, a bad wig which needed to be straightened and bad make-up. The girls saw the funny side though and said their dad needed a makeover.

Last November, Iain decided to live as Tricia full time. The girls threw him a ‘good bye Iain party’ and burnt all his old clothes. They say he’s much happier as Tricia and doesn’t like them calling him ‘dad’ when he’s dressed as her. They believe he’s now gay but say it doesn’t bother them. He still loves football and beer but also goes to ballet now.

They say he’s no longer shy and timid and is so confident as Tricia. ‘We’re one big happy unconventional family,’ says Sian, ‘mum and dad are best friends and we all live together. It was mad at first but now we couldn’t be happier. We love having two mums.’

The newspapers and magazines we work for love stories about extraordinary families. If you’re part of an extraordinary story and would like to see yourself in Woman’s Own magazine, or any other newspaper or magazine, contact us on message@talktothepress.com